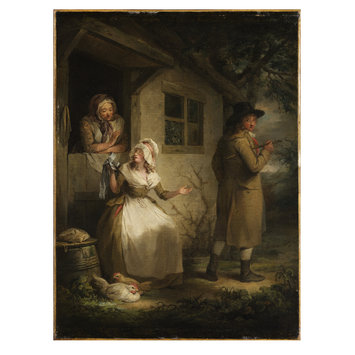 Johnny Going to the Fair

A rustic scene set at the door of a cottage. A young woman is seated by the door, talking to another, who leans out of the door. On the right stands a man, his gaze directed at the viewer. On the ground in front of the young woman are chickens.

Bequeathed by John Jones, 1882
John Jones (1800-1882) was first in business as a tailor and army clothier in London 1825, and opened a branch in Dublin 1840. Often visited Ireland, travelled to Europe and particularly France. He retired in 1850, but retained an interest in his firm. Lived quietly at 95 Piccadilly from 1865 to his death in January 1882. After the Marquess of Hertford and his son Sir Richard Wallace, Jones was the principal collector in Britain of French 18th century fine and decorative arts. Jones bequeathed an important collection of French 18th century furniture and porcelain to the V&A, and among the British watercolours and oil paintings he bequeathed to the V&A are subjects which reflect his interest in France.

According to the Oxford Dictionary of National Biography [viewed online 2/9/09] Valentine's Day is Morland's earliest known dated work (about 1786/7). A print after this painting formed part of a series of 4 prints called the Progress of Love produced in collaboration with fellow painter Francis Wheatley (1747-1801), and engraved and published by John Dean. As the DNB comments, Wheatley's "success as a painter of sentimental genre no doubt influenced Morland". This painting, like Girl with a Dove (V&A, 235-1879) dates from the early years of Morland's career when he was experimenting with a number of types of painting of a generally sentimental or moralizing tendency, with an eye on the popular print market.

George Morland did not exhibit a painting at the Royal Academy with the title Valentine's Day or Johnny going to the Fair; the latter title seems to be one that the painting acquired when in the possession of John Jones. The Catalogue of the Jones Collection; Part III - Paintings and Miniatures, cat. 511, gives it the multiple title of, Johnny going to the Fair, or, Valentine's Day - "The Fairing"'. A note comments confusingly that "A mezzotint engraving of this picture by R. B. Parkes, after J. Dean, was published under the title, Valentine's Day, - "The Fairing" by J. Dean, Bentinck Street, Shoho, 15th November, 1787. The engraving is reproduced on page 77 of George Morland, by J. T. Herbert Baily, 1906." In fact the original print by J. Dean, a copy of which is held by the British Museum, is entitled only Valentine's Day. The longer title Valentine's Day, - "The Fairing" seems to have been added in the edition by R. B. Parkes after the earlier edition by J. Dean. The connection between this painting and the subject of Valentine's Day was possibly one concocted by the engraver and publisher John Dean, and was not the original subject of this painting. In fact the connection between the four paintings by Wheatley and Morland, and between each painting and its respective title in print form seems equally tenuous. In Morland's so-called Valentine's Day it is indeed hard to see any obvious link between the figures depicted and Valentine's Day, and one would find it hard to guess the subject once the title is removed from the picture. In fact the male figure, who walks away from the two women, does not seem of interest to either of them, who seem engrossed in their conversation, and certainly his departure does not seem a matter of regret to either. Similarly, he does not look at them, but glances over his shoulder directly at the viewer. It is an unresolved subject, and the alternative title, Johnny Going to the Fair is no more helpful in understanding the true nature of this oddly disconcerting image. 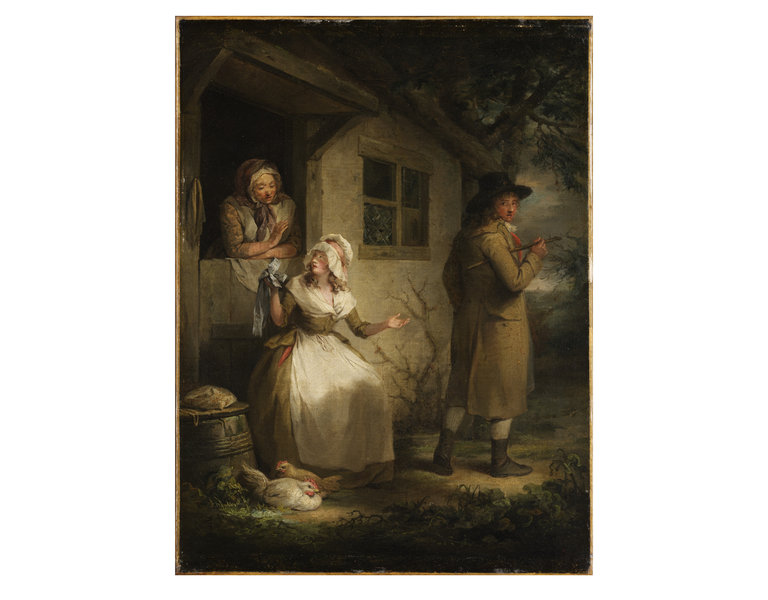