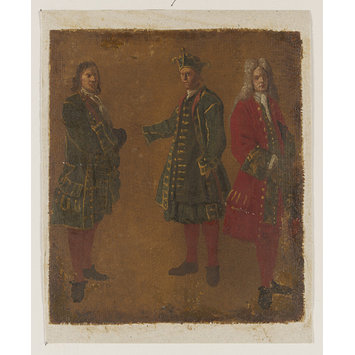 A study of three men standing in various poses, each wearing a fashionable long coat, waistcoat, cravat, breeches and red hose. This is part of an album of fifty-three sketches by Carlevarijs which includes figures he appears to have painted in the open air in preparation for insertion into formal compositions. The figures appear frequently in his paintings between 1707 and 1726 and are closely related to his etchings in Le fabriche e vedute di Venetia of 1703.

Historical significance: This study of three men standing in various poses and elaborate dress reveals a crucial part of Carlevarijs’ artistic process. He would sketch figures in the open air in preparation for insertion into formal compositions. Although a direct connection between this study and a final work has not been identified, in general, works from this album of sketches appear in Carlevarijs’ paintings between 1707 and 1726. Studies such as these would ultimately form part of a Venetian veduta or prospect painting, a genre which Carlevarijs is generally credited with establishing as an artistic subject in the eighteenth century. He populated his vedute with elegantly posed and well-dressed figures, concealing the decline of the Republic under the splendour of the pageants, festivals and regattas he often represented. Carlevarijs' sketches also demonstrate his great influence on Canaletto, whose figures and their arrangement often show a marked debt to the older Master such as in Venice: The Feast Day of Saint Roch ca. 1735 (National Gallery, London, NG937).

This work is part of an album of fifty-three sketches by Carlevarijs which includes figures he appears to have painted in the open air in preparation for insertion into formal compositions. The figures and objects appear frequently and virtually without variations in his paintings between 1707 and 1726 and are closely related to his etchings of 1703 in Le fabriche e vedute di Venetia. Composed of 104 views of Venice, the etchings formed the most complete survey of the fabric of the city ever produced and served as a model for Venetian view painters throughout the 18th century. Carlevarijs' sketches reveal a particular attention to costume, highlighting Venetian style of dress which was highly regarded in fashionable circles throughout Europe from the 16th through the 18th centuries. The maritime republic imported raw materials from the Far East and exported finished products including highly desirable velvets and brocades. The taste for Venetian textiles persisted into the 18th century. In this period however, Venice's power was dwindling and her government corrupt. The city nevertheless sought to present a facade of a wealthy city peopled with bright and gregarious multitude engaged in pleasurable pursuits. As Carlevarijs stated in the dedication to Le fabriche, he intended his paintings to 'rendere più facile alla notitzia de Paesi stranieri le Venete Magnificenze' [render more clearly the magnificence of Venice to foreign countries] 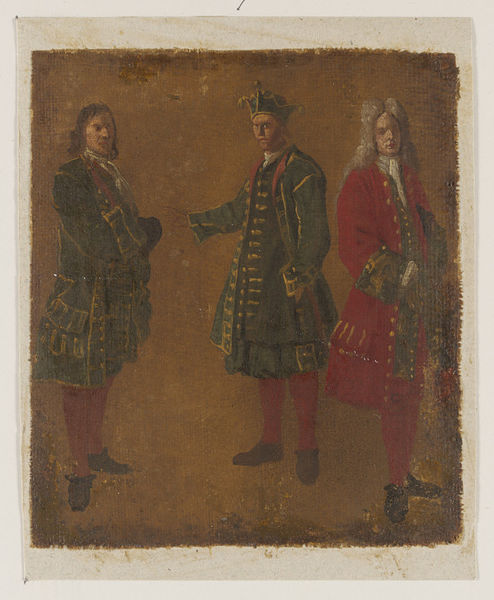