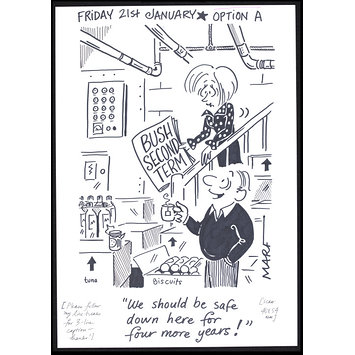 "We should be safe down here for four more years!"

This cartoon appeared in the Evening Standard on 21 January 2005, and is artist Marf's take on the current news story. As she describes it: 'Having won the US election against Democratic candidate Bob Kerry in November, President George W. Bush is sworn in for a second term, a depressing thought for a great many Britons and Americans.'

'Marf' drew daily topical cartoons for the Evening Standard between March 2002 and August 2005, moving to the Londoner's Diary page in August 2003. The drawings cover key political and social issues of the period, providing a vivid and often hilarious response to the main news of the day. The Evening Standard is London's only evening newspaper, publishing up to five editions a day. In Marf's own words: 'The cartoonist needs to keep up with the rapid pace of event.'

Black and white line drawn cartoon showing the interior of a cellar or basement. A harrassed looking woman, wearing spotted blouse and black skirt, is coming down the stairs holding a newspaper with the headline 'Bush second term'. A man, wearing shirt, pullover and pin-striped trousers, is already in the basement holding a mug of tea and looking quite cheerful surrounded by boxes of biscuits, tins of tuna and bottles of drink.

Some lines have been blocked out with liquid paper, and faint underdrawing can be seen.

"We should be safe / down here for / four more years!"
Written in pen across bottom; title to piece

[Please follow / my line-breaks / for 3-line / caption - / thanks!]
Written in pen to left of caption

Donated by the artist.

Cartoon, "We should be safe down here for four more years!" by 'Marf' (Martha Richler), published in The Evening Standard, 21 January 2005; London.

Attribution note: for publication in newspaper
Reason For Production: Commission 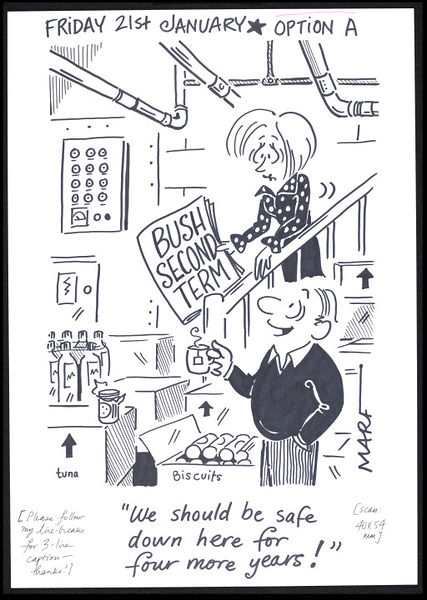