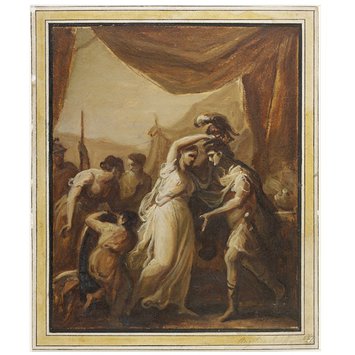 This painting is an oil sketch, i.e. a preparatory study for a larger composition. It shows classical figures set in a military camp. In the 1770s, Kauffmann made a series of painting drawing from classical subjects such as the Trojan legend and the Odyssey. Although the precise subject matter has not been identified, the overall setting, classical dresses and burning incense on the altar indicates that it probably draws from a Greek or Latin source.

A woman placing a helmet on the head of a young warrior; they are standing near an altar where incense is burning in the tent; another woman is preparing his shield and two others and a sentinel are assembled near a second tent in the distance.

Historical significance: Angelica Kauffman's pictures were particularly popular in England and were used in interior decorations such as murals and designs painted on furniture, mostly in cooperation with the architect Robert Adam. Her designs were also often distributed as prints.
In the 1770s, A. Kauffmann made a series of history paintings inspired from Comte de Caylus, Tableaux tirés de l'Iliade, de l'Odyssée d'Homère et de l'Enéide de Virgile, published in 1758, and it is most likely that this sketch belongs to the same series. It seems however that Kauffmann did not execute a finished version of this composition.
Comparable compositions include Hector Calling Up Paris to a Battle, 1775, Hermitage and The Return of Telemachus, 1770-1780, Five College Museums Collections, Massachusetts.
A common factor between these compositions is the focus of a few key figures arranged near the foreground plane, which places the date o execution in the same decade between 1770 and 1780.

An oil sketch is a type of painted work of small dimensions that first appeared in the 16th century. It derives from the Renaissance practice of preparatory drawings in pen and ink and is generally executed as a preparatory study in mixed oil and tempera for a finished larger work as an alternative to drawings. The finish of these studies, often called modello, can be more or less refined. The earliest known oil sketches are by Polidoro da Caravaggio (ca. 1497-ca. 1543) but the technique spread quickly among the artists including Federico Barocci (1528-1612), Cristofano Allori (1577-1621), Tintoretto (1519-1594 ) and Giovanni Benedetto Castiglione (1609-1664 ) and became an important feature of the Baroque art. Peter Paul Rubens (1577-1640) for example is one of the greatest examples of Baroque artists' use of the oil sketch and contributed to introduce its practice in Flanders. This method benefits to both artists and patrons as not only the artists were able to present and promote their work through these support but the patrons could also request an oil sketch to evaluate a project at an early stage. Sometimes considered as a works of art in se, oil sketches were also offered by the artists to connoisseurs. Oil sketches were still favoured during the Rococo and the Romantic period but at the end of the 19th century, the artists tent to paint more and more directly on the support, abandoning thus gradually the oil sketch in its function as a preparatory study. 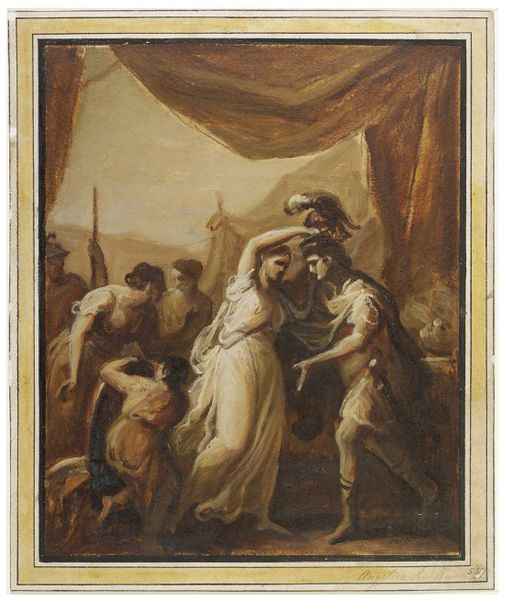