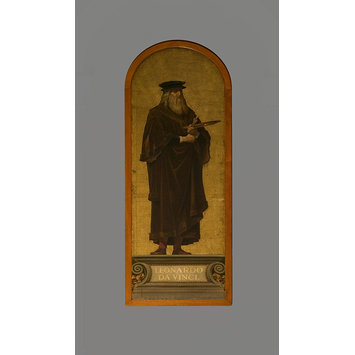 Leonardo da Vinci: design for a mosaic in the Museum (the 'Kensington Valhalla')

Full-length portrait of Leonardo da Vinci, wearing a brown cloak, a black hat and a beard. He holds several paintbrushes and an artist's palette standing on a plinth inscribed with his name against a gold background.

The representation of Leonardo here is based on the profile portrait illustrated in Vasari's Lives of the Artists, which shows the artist late in life and heavily bearded. This woodcut was itself based on a red chalk drawing probably executed from the life by Leonardo's pupil, Francesco Melzi.

John Tenniel (1820-1914) exhibited at the Royal Academy and elsewhere between 1835 and 1880. He is best know, however, for his graphic work, which did much to define the imagery of the Victorian age. For a fifty year period, 1851 to 1901, he was on the staff of Punch, where he drew nearly all the principal cartoons. Most famously, he illustrated Lewis Carroll's Alice's Adventures in Wonderland and Through the Looking Glass and What Alice Found There. 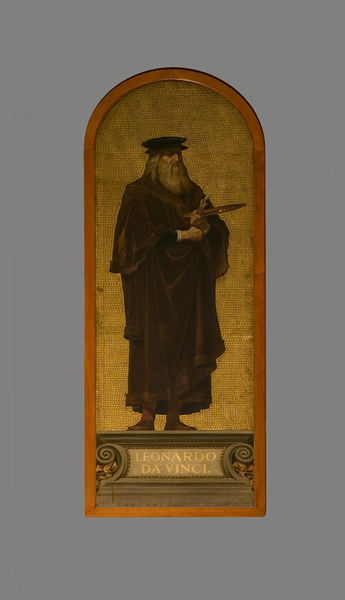