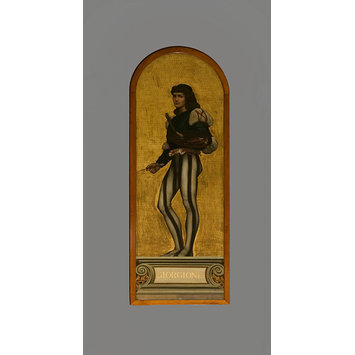 Giorgione: design for a mosaic in the Museum (the 'Kensington Valhalla')

Full-length portrait of Giorgione holding an artist's palette and brush.

'V PRINSEP'
Signed by the artist

Historical significance: Giorgione (Zorzi da Castelfranco; ca.1477-78-1510) had a profound influence on Venetian art of the 16th century, most directly on that of Titian, with whom he worked. Giorgione's work is characterised by his use of intensely saturated colours and his enigmatic subject matter, often set in atmospheric landscapes. Little is know about Giorgione's life, and as a result there has always been little agreement over which paintings can be securely attributed to him.

Val Prinsep (1838-1904) was influenced by the Pre-Raphaelites at the beginning of his career, and went on to study in Paris. He became an 'honorary member' of the so-called St John's Wood Clique, a loose association of historical genre painters from the St John's Wood area of London, many of whom had been commissioned to paint the decorative lunettes in the National Competition Gallery in 1868. Prinsep himself was commissioned in 1869 to paint a large overdoor painting for the National Competition Gallery showing the distribution of art prizes, a composition which includes portraits of Cole, Leighton and Burchett (F. R. Pickersgill was commissioned to paint its pair).

Oil painting, 'Giorgione' (design for a mosaic in the Kensington Valhalla), Val Prinsep, about 1865 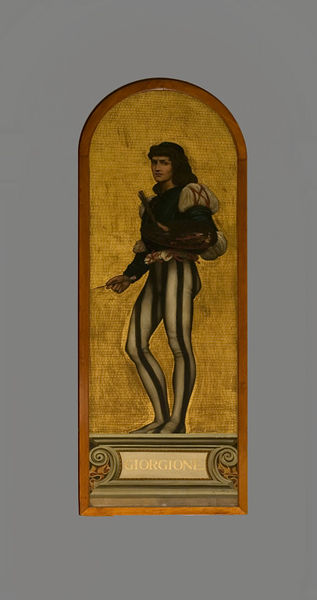