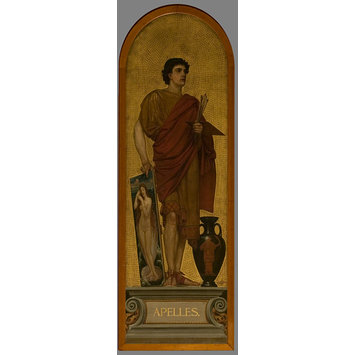 Apelles: design for a mosaic in the Museum (the 'Kensington Valhalla')

Full-length portrait of Apelles, supporting a picture of Aphrodite with a greek vase by his feet.

Historical significance: Apelles (fl. 330 BC) is the most famous Greek painter in antiquity, now known only through descriptions. His most famous work was a painting of Aphrodite rising from the sea, which Poynter depicts him holding in this Valhalla portrait.

According to Pliny, Alexander asked Apelles to portray his favourite concubine Campaspe. The artist fell in love with his subject while painting her. Because Alexander so admired his skills, he gave Campaspe to the painter.

Apelles was regarded in the 15th and 16th centuries as an archetype of the ideal painter of Ancient Greece. Hardly any paintings from Antiquity had been discovered at this period, but the descriptions of works by Apelles found in Pliny were used as the basis of compositions by painters such as Botticelli.

Edward John Poynter (1836-1919) was influenced as a boy by the large-scale academic paintings of Frederic Leighton. He began studying at the Royal Academy Schools in 1855, but, increasingly attracted by the Continental academic system, soon left to train in Charles Gleyre's studio in Paris. He enrolled in the École des Beaux-Arts, where his fellow students were George Du Maurier, Thomas Armstrong and James McNeill Whistler.

Poynter first exhibited at the Royal Academy in 1861, and during the next few years he began to make his name as a portraitist and as a painter of classical subjects. His large painting Israel in Egypt firmly established his reputation when it was exhibited in 1867.

As well as commissions for Apelles and Phidias for the Kensington Valhalla, Poynter was also commissioned to provide decorations for the Grill Room at the Museum (1866-ca.1874) and the Lecture Theatre apse, although his design for this was never executed.

The latter part of Poynter's career was shaped by his involvement in high public office. In 1871 he was appointed the first Slade Professor at University College London, and in 1875 he became Director and Principal of the National Art Training Schools in South Kensington. From 1894 to 1904 he was Director of the National Gallery in London, the last practising artist to hold the post. In 1896 he was elected President of the Royal Academy, a position he held until his resignation in 1918.

Poynter's two Valhalla subjects, the greatest painter and sculptor of Antiquity, were highly appropriate as he specialised in classical subjects.