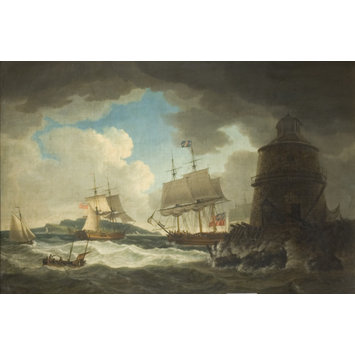 The Lighthouse in the Bay of Dublin, with His Majesty's Yacht 'Dorset'

This maritime scene shows the arrival of the Dorset, the royal yacht at the disposal of the Lord Lieutenant of Ireland, in the Bay of Dublin. The 18th-century landmark of Poolbeg lighthouse, situated at the end of the North Bull wall of the Bay, is on the right. It is likely that Serres painted this work as a result of his visit to Ireland between 1787-88 and used it in his bid to acquire the royal position of Marine Painter to H.R.H. the Duke of Clarence which he was granted in 1789.

Maritime scene showing a broadside view of a yacht, the Dorset, arriving in Dublin Bay, flying the Union flag at its mast head and the red ensign at its stern. Poolbeg lighthouse is situated on the right, with its iron balustrade and gallery and octagonal tower. On the left of the Dorset is a stern starboard view of another yacht leaving the Bay whilst further left, are two smaller vessels. Land is visible on the horizon line on the left and extends almost halfway along the painting. The sky is composed of a mass of dark cloud on the right and white cumulous cloud and a patch of blue, centre-left.

This maritime scene shows the Dorset, the royal yacht used by the Lord Lieutenant of Ireland, the British monarch’s official representative in Ireland, arriving in Dublin Bay. The yacht flies the Union flag at its mast head, indicating that the Lord Lieutenant may be on board. Poolbeg lighthouse, situated at the end of the North Bull wall of the Bay, is seen on the right, with its octagonal-lantern top and iron balustrade and gallery.

The painting, dated 1788, was probably executed as a result of Serres’ trip to Ireland between 1787-88. In all likelihood it derives from a drawing, dated 1787, in the National Maritime Museum (The Dorset yacht leaving Dublin harbour, PAG9727). In contrast to the V&A work, this shows the Dorset heading out of port. However, in terms of its composition with Poolbeg lighthouse on the right, it is remarkably similar. With regard to the V&A painting, Alan Russett believes that the presence of the Union flag suggests that Serres may actually have witnessed the arrival of the Lord Lieutenant on board the Dorset (Alan Russett, John Thomas Serres: The Tireless Enterprise of a Marine Artist, Hampshire 2010, pp. 36-37). He further believes that Serres sent this painting to the Royal Academy (RA) in 1788 in a bid to obtain royal patronage, namely the position of Marine Painter to H.R.H. the Duke of Clarence. As Serres was awarded this position in 1789, the V&A work may have formed a critical part of his success.

Russett also suggests that the currently untraceable View taken from Howth looking towards Dublin’s lighthouse, exhibited at the RA in 1794, may have been executed as a pendant to the V&A painting (Russett, p.37).

Oil painting, 'The Lighthouse in the Bay of Dublin, with His Majesty's Yacht "Dorset"', John Thomas Serres, 1788 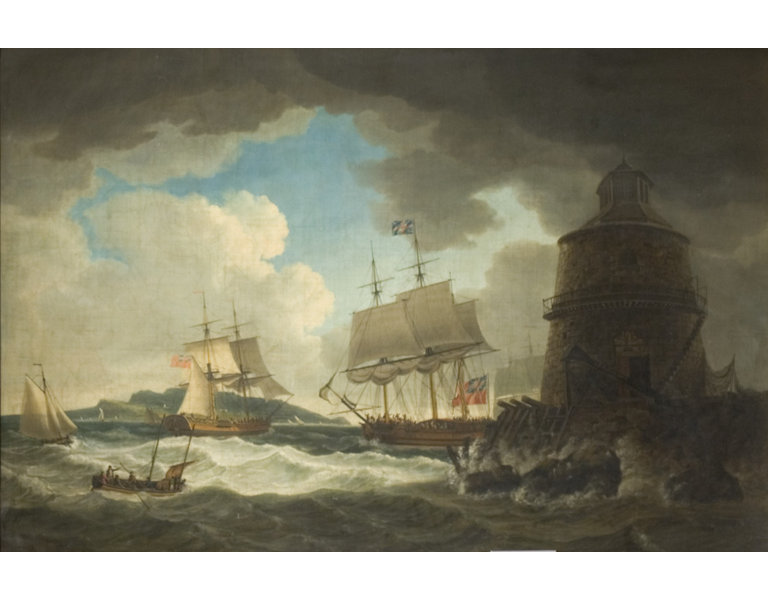