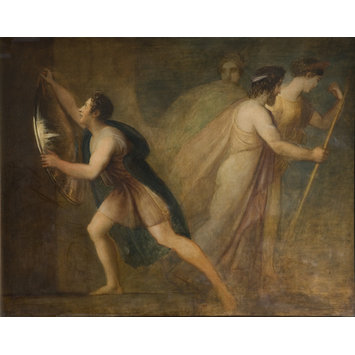 Orestes hanging up the shield of Agamemnon

Painting of Orestes hanging up the shield of Agamemnon, and three other figures in classical dress walking away.

Bequeathed by Rev. Alexander Dyce, 1869
Reference to Dyce : Science and Art Department of the Committee of Council on Education, South Kensington Museum.A Catalogue of the Paintings, Miniatures, Drawings... Bequeathed by The Reverend Alexander Dyce. London, 1874. A 'Note' on p.v. comments, 'This catalogue refers to the Art portion of the Collection bequeathed to the South Kensington Museum by the Reverend Alexander Dyce, the well-known Shakespearian scholar, who died May 15, 1869'. The Catalogue. Paintings, Miniatures, &c. by Samuel Redgrave notes of the 'Oil Paintings', 'The strength of Mr. Dyce's valuable bequest to Department of Science and Art does not lie in [this] portion ... which is in its nature of a very miscellaneous character. The collection was made apparently as objects offered themselves, and without any special design.'

Dyce owned 3 oils by Stothard (Dyce. 27, 28, 29), which reflected his interest in Shakespeare and other literary subjects. A further oil painting (Dyce.49) has now been attributed to Stothard, while a sketch on paper in oil (Dyce.884) was originally catalogued as a 'drawing', along with other sketches and designs by Stothard (Dyce. 825 to 910).

This small oil painting was catalogued as by "Painter Unknown" when acquired in 1869, and later as "By or after Stothard". The subject is described as 'Orestes hanging up the shield of Agamemnon'. Agamemnon's shield is described in the Iliad, traditionally attributed to Homer. The poem describes the tenth and final year of the Trojan War, the siege of the city of Troy by the Greeks. The plot concerns Achilles, the Greek warrior, whose anger toward the king of Mycenae, Agamemnon, proves disastrous for the Greeks. Agamemnon's shield is described in Book XI of the Iliad; the shield is circular, inscribed with allegorical designs, and "... in the midst of all was the blank-eyed face of Gorgon with her stare of horror, and Fear was inscribed upon it, and Terror. " A gorgon was a female monster whose power was such that a person looking upon her would be turned to stone; Medusa was the most notorious gorgon, who additionally had hair of venomous snakes. It is not actually possible to discern the gorgon's face in this small oil.

Orestes was the son of Agamemnon and Clytemnestra. According to Homer, Orestes was away when his father returned from Troy to meet his death at the hands of Aegisthus, his wife's lover. On reaching manhood, Orestes avenged his father by killing Aegisthus and Clytemnestra. Aeschylus's dramatic trilogy the Oresteia recounts the murder and the pursuit of Orestes by the Furies for the crime of matricide. In Euripides' Iphigeneia in Tauris, Orestes is reunited with his sister Iphigeneia and regains his father's kingdom.

The scene depicted by Stothard could well be of Orestes, shown with his father's most famous attribute, his shield. That the subject is Greek is emphasised not only by the costume and hair-style of the figures, but also by the frieze like design of the composition, and by the pose of Orestes, which echoes the famous so called "Borghese Gladiator", one of the most admired works of antiquity in the 18th and early 19th centuries. 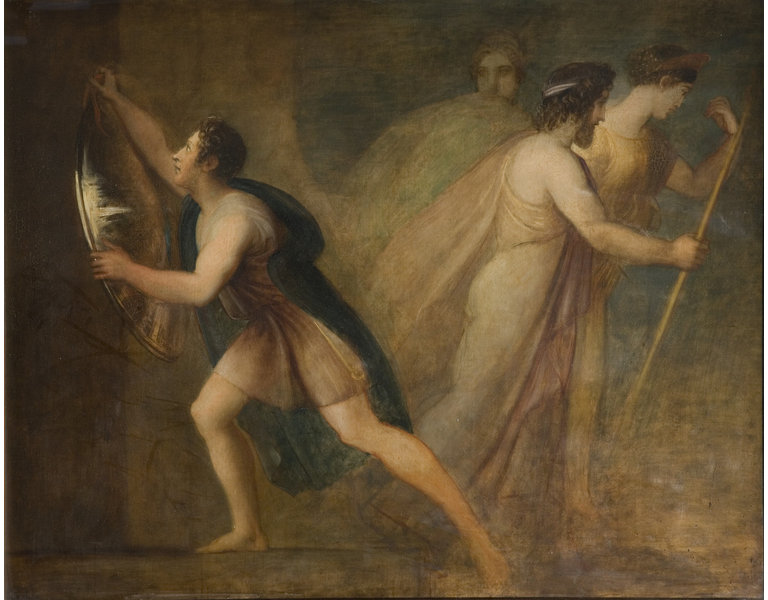