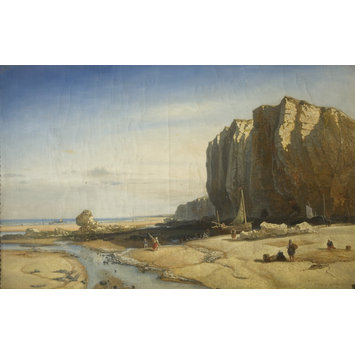 Rocky Coast with figures and boats

Paul-Jean Clays (1817-1900) was born in Bruges but studied in Paris with Horace Vernet (1789-1863) and the marine artist Théodore Gudin (1802-1880). He later joined the cicle of the mathematician Adolphe Quételet, Director of the Brussels Observatory, which included many of the leading artists and scientists of the time.

This painting is a typical example of Clays' prolific output of marine paintings. It represents a Dutch or Flemish coast at low tide bathed in the sunlight, with a cliff on the right hand-side, a boat and figures on the beach. Clays combined seascape and genre painting and, like many artists of his generations, was particularly interested in the pictorial rendering of light.

A Dutch of Flemish coast at low tide bathed in the sunlight, with a cliff on the right hand-side, a boat and figures on the beach.

Historical significance: This painting is a good example of Clays' prolific output of Marine paintings, a subject matter that he favoured throughout his career. He depicted many seascapes including scenes of the Belgian and Dutch coast. Essential characteristics of his art, exemplified in the present painting, are a painstaking brushwork and a palette dominated by blue, ivory and red-brown tones. Clays was attracted from earliest childhood by the sea and developed a style that goes back to the 17th century of marine painting with such paintings as Marine, Stadhuis, Bruges and Seapiece Koninklijk Museum voor Schone Kunsten, Antwerp. He followed in this trend the Romantic Belgian painter Charles Louis Verboeckhoven (1802-1889).
In this painting, ordinary people are involved in daily activities such as repairing the fishnets and fishing from a carved stream out of the sand at low tide. As he combine in doing so marine painting and genre scene, Clays also participate to the Belgian genre school that focused on an immediate contact with their subjects and displayed a new realism that would precede and announce the school of The Hague. The artistic links between the northern and the southern parts of the Netherlands were indeed still very strong even after the independence of Belgium in 1830. 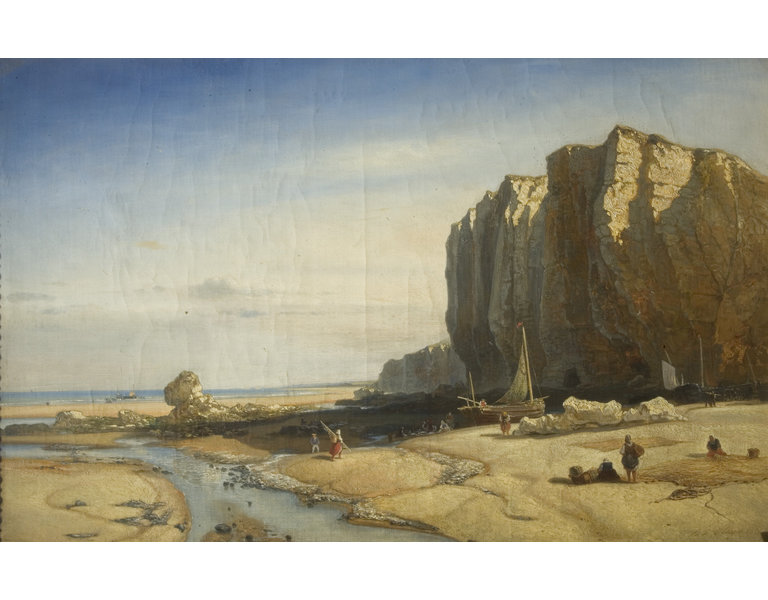