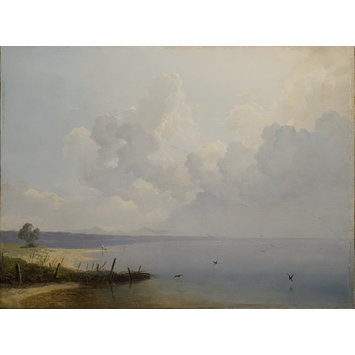 A view of Lake Constance, with an extensive sky.

The Rev. C. H. Townshend. Listed in the 1868 post-mortem register of the contents of Townshend's London house (V&A R/F MA/1/T1181) in the 'Fossil and Mineral room' as by Zimmermann; Bequeathed by Rev. Chauncey Hare Townshend, 1868.

Historical significance: Zimmermann had a brilliant technique and excelled at light effects and spontaneous effects of nature. Lake Constance (German: Bodensee ) is on the Rhine at the northern foot of the Alps. The third largest lake in Central Europe, it has shores in Germany, Austria and Switzerland.

This lakeside scene is almost devoid of incident, save for some hovering birds and two tiny figures at the left, middle distance.

The emphasis upon the sky which is a marked feature of this work, seems to have been especially congenial to the Rev. Chauncey Hare Townshend, who became a major early patron of landscape photography, and particuarly of the French photographer Gustave le Gray, who excelled in seascapes with extensive skies. Townshend owned a number of such photographs (V&A no.67.995, 67.997, 68.000-68.004).

Albert August Zimmermann (1808-88) was born at Zittau in Saxony. His brothers Max Richard and Robert Zimmermann were also painters. He studied at the Academies in Dresden and Munich. In 1857 he was appointed by the Austrian government to a professorship at the Milan Academy and from 1860 to 1871 he taught at the Academy in Vienna. He painted mainly landscapes in a naturalistic style.

The term ‘Biedermeier’ refers to bourgeois life and art in Germanic Europe, an extensive area embracing such cities as Copenhagen, Berlin, Vienna and Prague, from 1815 (the Congress of Vienna) to the revolutions of 1848. Biedermeier painters were ideologically opposed to academic and religious painting and favoured such subject matter as portraits, landscapes and genre scenes, with still-lifes, especially of flowers. They share a similar technique in the use of separate, clear tones and a high degree of finish, reminiscent of Neo-Classicism while they tend to convey a greater sentimentality. By the 1880s, the influence of this artistic movement was on the wane and was even used pejoratively to characterize the reactionary bourgeois elements in society, which remained quite indifferent to social problems and cultivated a sense of order and sobriety, especially in the private sphere and the domestic realm. 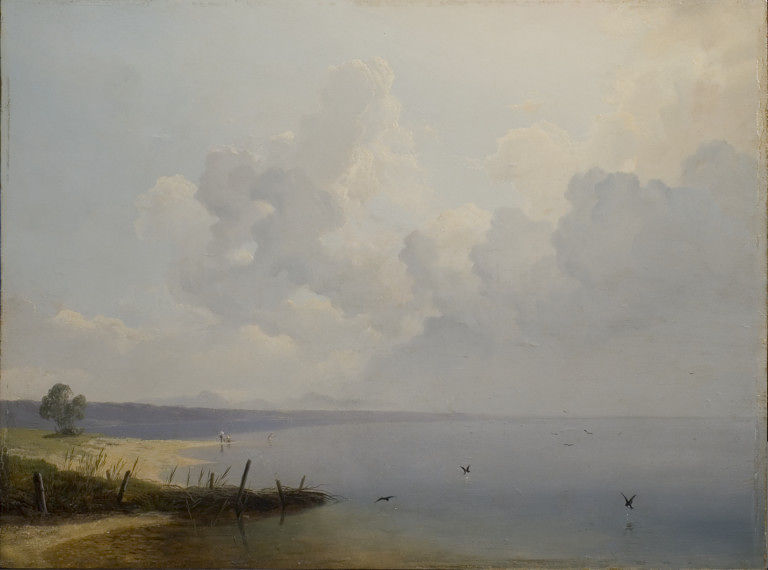