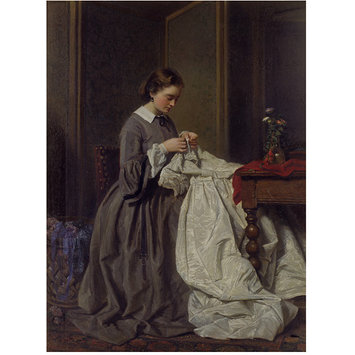 Charles Baugniet (1814-1886) studied at the Brussels academy and later with Joseph Paelinck (1781-1839). After establishing himself as one of the leading portrait painters, Baugniet moved to London where his career continued to flourish. His works are included in the collections of British Museum (London), the Cabinet des Estampes (Paris) and the Brussels Museum.

This painting showing a seamstress making a wedding in a bourgeois interior is a good example of Baugniet's large output of female portraits 'en situation'. The artist produced many full-length portraits of women set in their own bourgeois domestic interior and involved in a day-to-day activity such as writing a letter, receiving visitors, returning from the ball…

A seamstress working at the white satin dress in a domestic interior: she has a Turkish carpet under her feet, a basket with ribbons and clothes behind her while on the table nearby is a vase with flowers.

'C. Baugniet 1858'
Signed and dated by the artist, lower left

Historical significance: This painting is a typical example of Baugniet large output of female portraits 'en situation'. He used to represent them in their domestic interior involved in their daily occupations. He however had a predilection for the bourgeois scenes such as The Letter sold Christie's London, 11 May 1990, lot 62, in which an elegant lady is sealing a letter in a richly decorated interior, or The Bride, sold Christie's, New York, 14 Feb. 1996, lot 98, showing a bride to be in prayer in her bedroom.
The seamstress follows to the same compositional idea, not without recalling a certain Victorian imagery. Set in a bourgeois interior, the lady is making a dress in a delicate white satin that probably is a wedding dress as the roses' bouquet on the table and the red colour of the tablecloth are traditional symbols for love and virginity. This picture is furthermore a good example of how Baugniet responded to the British market which was in demand for such pictures. He was in London by 1843 and this painting, dated 1858, was probably made for a British audience.

The artistic relationship between the Northern and the Southern Netherlands, that is modern-day Holland and Belgium, were very strong during the 19th century especially after the proclamation of the Kingdom of Netherlands in 1815. The Prix de Rome was awarded equally to Antwerp and Amsterdam artists, even after the independence of Belgium in 1830. The majority of Belgian art of the first half of the 19th century, including history painting, genre scenes, landscape and portrait paintings, articulated a new national pride which nevertheless drew upon French academic taste. Such artists as Jean-Bernard Duvivier (1762-1837), Henry Leys (1815-1869) and Karel Verlat (1824-1890) made extensive use of these renewed genres in their oeuvre. Belgian artists also travelled a great deal, not only for training purposes in the tradition of their artistic predecessors but for the sake of discovering new surroundings and making new acquaintances: Paris was the favourite destination. While Italy also remained a popular destination, the majority of these artists tended to move on to other areas of interest, such as Morocco, less for their artistic traditions, and more for their exotic aspects. 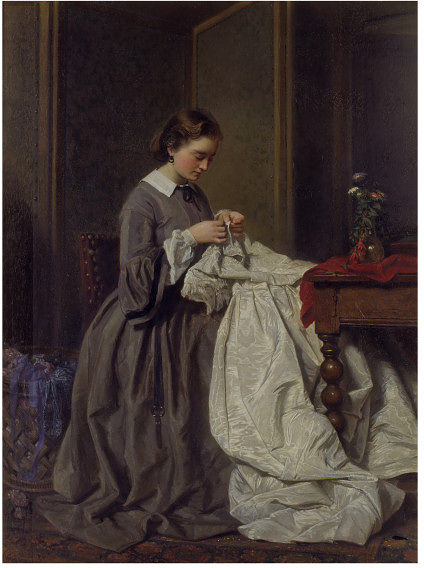