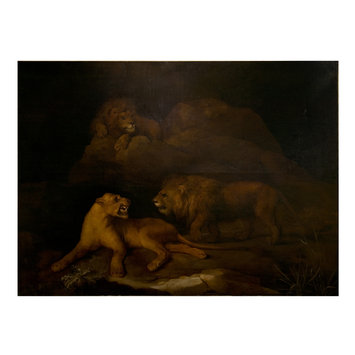 'Geo Stubbs pinxit 1776'
Signed and dated by the artist

Historical Significance: George Stubbs was to a large extent a self-taught artist. He studied briefly with Hamlet Winstanley (1694-1756), but he was disappointed by the experience and soon came back to his native Liverpool. He moved to York c. 1745 to study anatomy, where he illustrated Dr Jon Burton’s Essay towards a Complete New System of Midwifery (1751). After that Stubbs taught himself how to engrave the images. The 18 etchings published in Burton’s treatise were his first attempts at printmaking.

In the 1740s and 50s Stubbs worked as a portrait painter in Liverpool, Leeds and Wigan. The portrait of James Stanley (1755; Liverpool, Walker Art Gallery) is his earliest dated work. Stubbs visited Rome in 1754, but the he did not find much to admire in the ancient tradition. Nevertheless, his work shows a classical leaning towards harmony and restraint.

The study of the anatomy of the horse was started probably in 1756. For about 18 months Stubbs worked in a farmhouse at Horkstow, Lincolnshire, that would supply him with dead horses. He arranged them in life-like positions in order to make detailed drawings and notes. Stubbs needed this training to prepare himself for the task of painting life horses. In 1766 he published The Anatomy of the Horse, which he significantly signed on the title page: ‘George Stubbs. Painter’. The surviving drawings for this project are currently in the collection of the Royal Academy, London.

Stubbs moved to the capital probably during 1758. The Anatomy of the Horse was seen by many noblemen interested in breeding and racing horses, which provided the painter with many commissions. The most important patron at the time was probably Charles Lennox, 3rd Duke of Richmond. The three canvases painted for him were the 3rd Duke of Richmond with the Charlton Hunt; Henry Fox and the Earl of Albermarle Shooting at Goodwood; and Duchess of Richmond and Lady Louisa Lennox Watching the Duke’s Racerhorses at Exercise (all 1759-60, Goodwood House, West Sussex).

During the 1760s Stubbs’ work evolved showing inventiveness in design. During that time he worked for Charles Watson-Wentworth, 2nd Marquess of Rockingham, for whom he painted a Horse Attacked by a Lion (1762). This is the first of many versions of the subject which preoccupied Stubbs at the time. The motif might have been derived from an antique marble sculpture seen by the painter in Rome (now in the Palazzo Conservatori).

In the period 1761-1774 Stubbs exhibited regularly in London with the Society of Artists. In 1775 he transferred to the Royal Academy, although his election was initially nullified as he failed to submit a diploma picture. Later in his career Stubbs expanded his range of interests: he won renown as a painter of exotic animals (for example, The Zebra, New Haven, CT, Yale Centre for British Art) and carried out experiments in enamel painting. In the 1790s he received patronage from the Prince of Wales (later King George IV), for whom he painted 18 oil pictures, including Prince of Wales’s Phaeton (1791; Royal Collection, Windsor Castle). His last works show signs of meditation and undiminished powers. A year after Stubb’s death his studio sale was organised.

This painting belongs to a series exploring the theme of lion and lioness, created by Stubbs with varied backgrounds in the 1770s. (Egerton, nos. 116, 117, 161, 162, 163, 164).The earliest known version (no. 116) is painted in enamel and dated 1770. It is a smaller composition in octagonal shape, which nevertheless reflects precisely the poses of the two animals in the front. The later canvases, including this one which is signed ‘G. Stubbs pinxit 1776’ develop the theme with a wider setting and more detailed background. This particular canvas is not listed in the catalogue raisonné compiled by Judy Egerton. However, the composition is identical to nos. 161 and 162.

The painting shows that Stubbs was a careful observer of animal anatomy. He did not restrict himself to familiar horses and dogs, which were in high demand among his English patrons. His more adventurous explorations of animal painting feature depictions of zebras (no. 40), monkeys (no. 141) and yaks (no. 284). 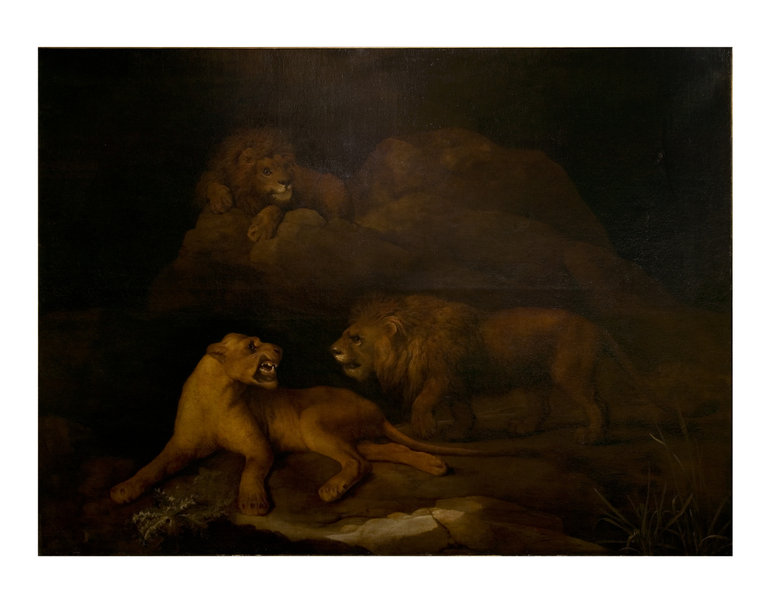