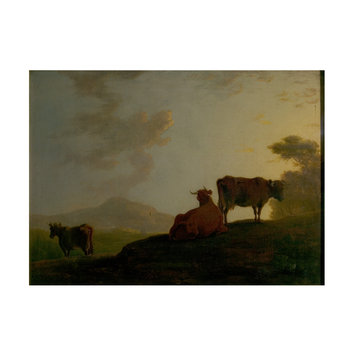 Cows in a landscape

John Allnutt, of Clapham Common, (1773-1863) was a wine merchant and well known art collector. He knew Constable and made him a present in 1825 of three sorts of ultramarine that he had bought in France ( Cove " ", p. 507, In. Parris, L and Fleming-Williams (eds.) Constable, exhibition catalogue, Tate Britain, London, 1991) and R.B Beckett, John Constable's correspondence , pp.84-85. He collected work by contemporary British artists including a considerable number of watercolours by Turner; David Cox, Thomas Girtin, as well as oils by Wilson. His collection was sold by Christies, Manson and Woods in 1863. The V&A also bought a painting by Julius Caesar Ibbetson (FA.238) at the sale when it acquired this work by Sawrey Gilpin.

Historical significance: Sawrey Gilpin (1733-1807), English animal painter. Born in Carlisle, Sawrey Gilpin came to London in 1749 for a nine year apprenticeship to the marine painter Samuel Scott. No marine paintings have been definitely attributed to Gilpin. During this period the young Gilpin began to sketch horses and carts in Covent Garden. These sketches brought him to the attention of William Augustus, Duke of Cumberland, who briefly employed him around 1759. During the 1760s, Gilpin divided his time between teaching drawing at Cheam School, Surrey, (where his brother William was rector) and working in London. Although animal painting was a popular genre in the eighteenth century, Gilpin never achieved the promise of his youth. His work remained overshadowed by that of the acclaimed animal painter George Stubbs (1724-1806). Elected ARA in 1795, Gilpin narrowly and controversially defeated William Beechey to become RA in 1797.

This painting shows three cows grazing. Gilpin had found a natural talent at a young age for representing animals. He developed this through his sporting scenes and animal paintings which he produced from the 1760s until his death. This painting demonstrates the artist’s familiarity with the form of cows by showing them in different postures from varying angles. Such pastoral scenes of cattle in a mountains landscape recalls earlier precedents of the Dutch artist Aelbert Cuyp (1620-1691) who specialised in this genre in the seventeenth century. Both artists focus on the cattle in their surroundings by placing them in the foreground. Also golden light is used to convey a calm mood in the works of these artists.

The cows are shown on top of a hill with views across a valley to a distant mountain. This landscape recalls that of Scotland or Wales. British artists became interested in local landscapes towards the end of the eighteenth century. The French Revolution, making it harder to travel to the continent at this time, resulted in more people choosing to explore their closer environs. It was also a time when the middle classes were beginning to travel, visiting places of interest in the British Isles. Sawrey’s brother, William Gilpin (1724-1804) responded to this interest by publishing illustrated books that instructed the reader on how to appreciate both the picturesque and rugged qualities of British scenery.

This painting shows Sawrey Gilpin responding the growing popularity of the picturesque landscape. The painting also offers Gilpin the opportunity to demonstrate his ability at depicting animals, for which he was highly regarded by contemporaries. An obituary published at the artist’s death confirms this, stating that he was completely “conversant” at depicting all animals from “the humblest of the domestic tribe to the roaring wanderers of the woods” (extract from “The Gentleman’s Magazine”, vol. 77, Pt.1, 1807, p.39).

Grant, M. H; A chronological History of English Landscape Painters in Oil from the XVIth century to the XIXth Century ; London, 1926, pl.59. 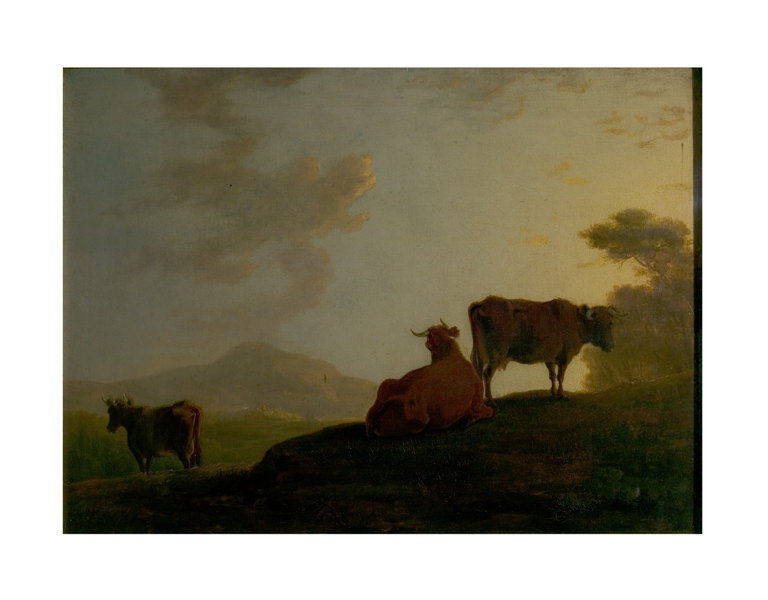