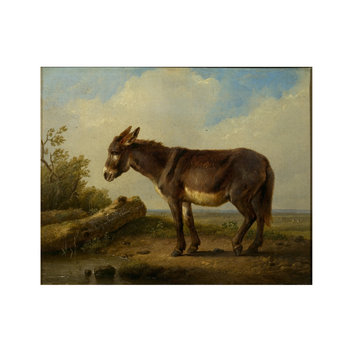 This painting, showing a donkey silhouetted against a white and blue sky, is a typical example of Verboeckhoven's depictions of animals in carefully arranged, flat landscapes. He also executed scenes of animals and farmers in the farmyard, of which the V&A's collection has an example (see 1528-1869). The artist was deeply influenced by the 17th-century imagery and the work of Paulus Potter, the great animal painter of the Golden Age.

In a flat landscape, a donkey in profile with, before him, a stump surmounted by foliage and a pond at his feet.

'Eugène Verboeckhoven f. 1846'
Signed and dated by the artist, left

Historical significance: Verboeckhoven specialised in classical landscape painting under the influence of his master Balthasar-Paul Ommeganck and particularly favoured the 17th-century imagery. He discovered the work of the great animal painter Paulus Potter (1625-1654) in the early 30s and remained extremely impressed by him. The present painting showing a donkey in a flat landscape is a typical example of Verboeckhoven’s borrowing from Paulus Potter’s famous animal studies. It also relates to Nicolaes Berchem’s (1620-1683) numerous animals studies, especially Two studies of donkeys, (RF642) Louvre, Paris.
The present donkey is identical as the one depicted in another Verboeckhoven’s composition (see V&A 1532-1869) even though it is painted from a closer point of view. This repetition witnesses Verboeckhoven’s trend to draw from a repertoire of motifs and reuse them in many compositions. Many drawing showing studies of animals such as donkeys can be found for instance
This compositional scheme also takes over Paulus Potter’s trend to silhouette animals in profile against a clear bright sky such as in his famous composition including imposing standing bulls.
Animal portraits were popular during the 17th century as they generally presented sheep, donkeys and cows conceived as embodiments of the Dutch national pride.
Art from the Golden Age was extremely appealing to landscape painters of the 19th century also because it represented a national glory and showed motifs such as cattle, scenes in the countryside, great perspective plans that renew the national pride in those years of political changes: the kingdom of the Netherlands unifying the northern and the southern Netherlands was proclaimed in 1815, and even after the independence of modern Belgium, the links remained strong.
Many comparable works can be found in private and public collections such as the Royal Collection, London (see Landscape with animals, Inv. RCN407874) and other similar pictures are in the Victoria and Albert Museum’s collection (see 493-1870 and 1085-1886 in which the same donkey is represented in the same position).
After the 1830s, Verboeckhoven’s work shows little evolution, but his paintings were very popular and rather expensive. He received several prestigious commissions and he obtained titles and decorations throughout Europe. 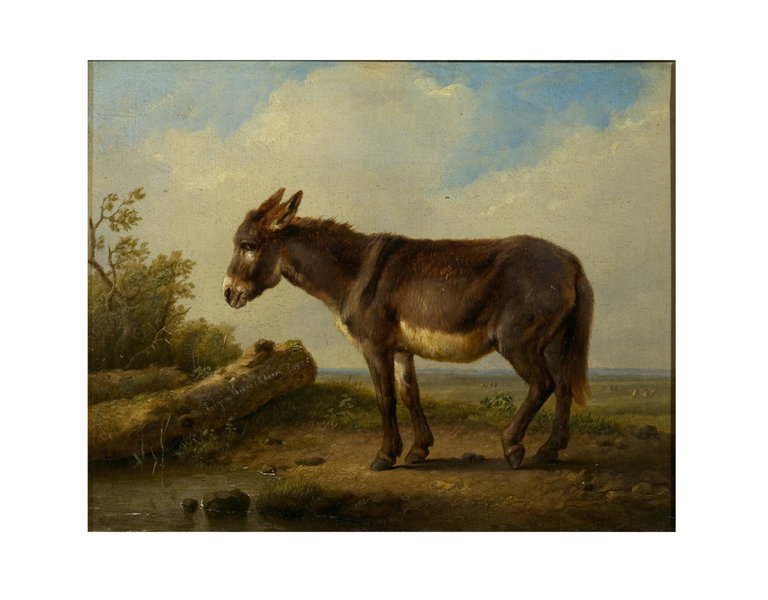