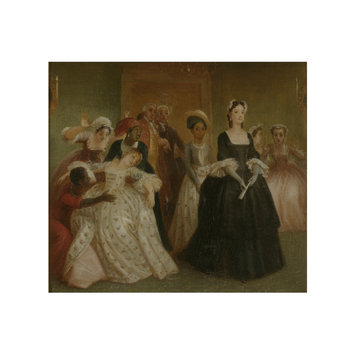 Anna Eliza Bray [Mrs Bray], in Life of Thomas Stothard, R.A., 1851 (p.123) provides a useful description of the events depicted in this painting; "Amongst Stothard's most characteristic works, may be named his playful and delicately combined compositions from the Rape of the Lock, and his picture from the Spectator, where in the story of Phillis and Brunette [sic], the lady mortifies her proud rival, by making her slave wear a petticoat of the same silk which the other had chosen for her splendid dress at the ball. The calm, dignified, and somewhat haughty deportment of the triumphant lady; the fainting, with surprise and vexation, of the rival beauty, and the self-satisfaction of the gaily-bedecked slave; are admirably contrasted, and form... a perfect dramatic scene in pictorial art." A simple line engraving illustrated in Mrs Bray renders the composition upright rather than horizontal; the legend reads, "Spectator, vol, I., No. 80. The Rival Beauties, Phillis and Brunette. Published in 1803".

The story was originally recounted in The Spectator, no.80 (Friday, June 1, 1711); the tale of Phillis and Brunetta, "two Rivals for the Reputation of Beauty". The story has been analysed in a number of recent discussions of race and gender, including Joseph R. Roach, Cities of the dead, 1996 (pp.30-31), who provides a useful summary of the story; "Vying with one another for the attentions of the marriage-able bachelors in London, both [Phillis and Brunetta] succeed after an intense campaign, waged with beautiful gowns and strategic flirtations, in marrying wealthy West Indian sugar planters, next-door neighbors in Barbados, whither the newly-weds sail. Once there, the jealousy of Phillis and Brunetta escalates with every provincial ball. The former seems to steal a march on the latter, Addison relates, when a ship from London arrives carrying 'a Brocade more gorgeous and costly than had ever before appeared in that Latitude'. Phillis, the consignee, gloats and preens. Brunetta fumes and rages until a remnant of the dreaded brocade falls into her hands; she then appears the the 'publick Ball in a plain black Silk Mantua, attended by a beautiful Negro Girl in a Petticoat of the same Brocade with whhich Phillis was attired'. Phillis swoons. She then flees the ball in chagrined despair, to depart the West Indies forever on the next ship home." 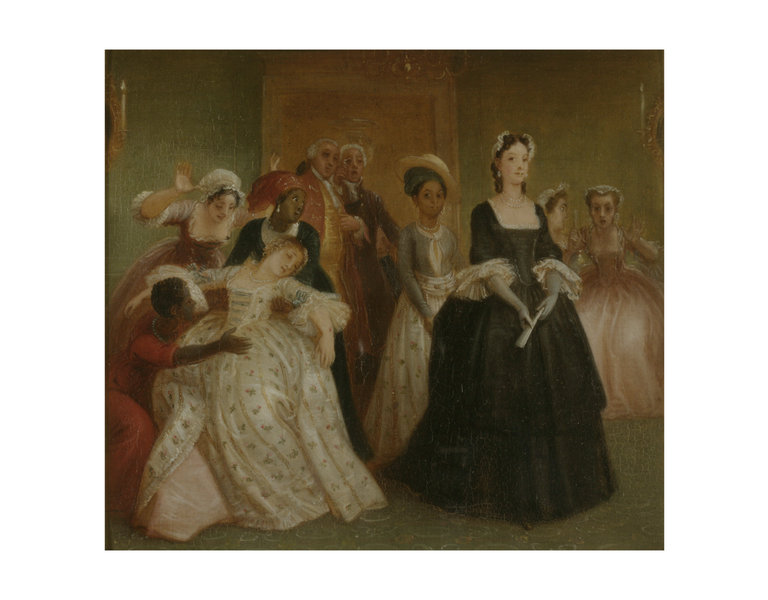