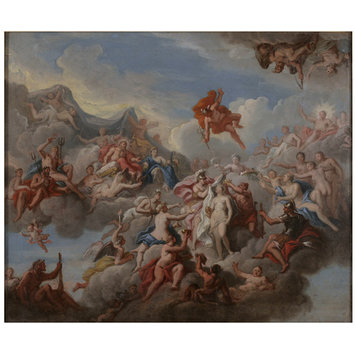 The Creation of Pandora

Louis Laguerre (1663-1721) was born in Paris and studied with the Jesuits before enrolling at the Académie Royale de Peinture et Sculpture. He worked with Charles Le Brun (1619-1690) before moving to England in 1683-84 and spent there the rest of his life. He specialised in decorative scheme in the Baroque manner, working for some time with Antonio Verrio (ca. 1639-1707), and achieved a great success as a decorator.

This painting is an oil sketch, i.e. a preparatory study, for a large decorative scheme depicted in the staircase ceiling at Petworth House, painted by Laguerre c 1720. It shows 'The Creation of Pandora' The myth of Pandora is told in Hesiod's Works and Days (59–105) and relates the story of the first human woman created by the deities, specifically by Hephaestus and Athena on the instructions of Zeus. This composition is characteristic of the Baroque manner which favoured some theatrical grandeur in the composition.

A crowd of semi-nude figures aloft among clouds with a female figure in the centre being dressed and crowned.

This painting is an oil sketch which has long been considered as a preparatory study for the decoration of the ceiling of the staircase in Kiveton House, Yorkshire (See Edward Croft-Murray 1962). Laguerre was indeed commissioned by Thomas Osbourne, 1st Duke of Leeds, in 1702-1703 the decoration of the whole staircase of the house including the walls and ceiling whereas the hall was painted by Sir James Thornhill who benefited greatly from Laguerre's influence. The house was demolished in 1811 and until the 1950s nothing was known of the character of the internal decoration.

This identification was based on a preparatory study in pen and wash for the ceiling
decoration is in the Duke of Leeds collection, Yorkshire Archeological Society', as published by Norbert Lynton in his 1956 article on Kiveton. However, as L. Hamlett has pointed out (written communication, Nov. 2013), the drawing bears far less resemblance to the V&A oil sketch than the sketch does to the - still extant - staircase ceiling at Petworth House, painted by Laguerre c 1720 and called 'The Creation of Pandora' in National Trust records. It is therefore more likely that this sketch was intended as a preparatory study for the staircase ceiling at Petworth House, rather than the ceiling of the staircase in Kiveton House.

The present sketch would therefore show the creation of Pandora rather than the the marriage of Cupid and Psyche on the Mount Olympus. The myth of Pandora is told in Hesiod's Works and Days (59–105) and relates the story of the first human woman created by the deities, specifically by Hephaestus and Athena on the instructions of Zeus.

The art of Louis Laguerre is a good example of the diffusion of the continental Baroque art in England, together with the Italian artist Antonio Verrio (ca. 1639-1707), of whom the museum also owns important oil sketches (see P.2-1956 and E.1085-1916). The museum probably acquired this piece as a good example of Baroque decorative art fashionable in Great Britain during the beginning of the 18th century.

An oil sketch is a type of painted work of small dimensions that first appeared in the 16th century. It derives from the Renaissance practice of preparatory drawings in pen and ink and is generally executed as a preparatory study in mixed oil and tempera for a finished larger work as an alternative to drawings. The finish of these studies, often called modello, can be more or less refined. The earliest known oil sketches are by Polidoro da Caravaggio (ca. 1497-ca. 1543) but the technique spread quickly among the artists including Federico Barocci (1528-1612), Cristofano Allori (1577-1621), Tintoretto (1519-1594 ) and Giovanni Benedetto Castiglione (1609-1664 ) and became an important feature of the Baroque art. Peter Paul Rubens (1577-1640) for example is one of the greatest examples of Baroque artists' use of the oil sketch and contributed to introduce its practice in Flanders. This method benefits to both artists and patrons as not only the artists were able to present and promote their work through these support but the patrons could also request an oil sketch to evaluate a project at an early stage. Sometimes considered as a works of art in se, oil sketches were also offered by the artists to connoisseurs. Oil sketches were still favoured during the Rococo and the Romantic period but at the end of the 19th century, the artists tent to paint more and more directly on the support, abandoning thus gradually the oil sketch in its function as a preparatory study. 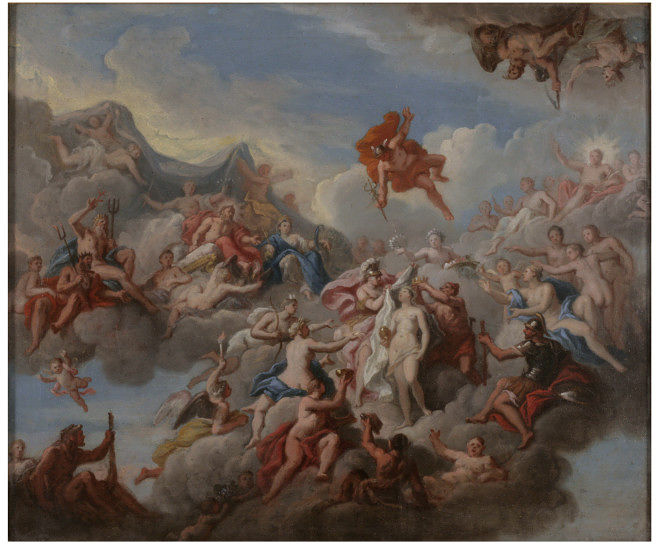