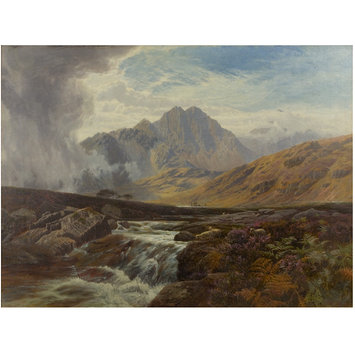 'Vicat Cole 1863'
Signed and dated by the artist

Historical significance: George Vicat Cole (1833-93) was born in Portsmouth, the eldest son of the landscape painter George Cole (1810-83). He was taught by his father, who he accompanied on sketching tours in England, Wales and the Moselle. In 1852 the family moved to London. Cole began to exhibit in the mid 185os, initially as 'George Cole, junior' to distinguish his work from his father's. He soon adopted his mother's Huguenot maiden name Vicat, and in subsequent years dropped George altogether, using Vicat as his first name. In 1853, when Cole was twenty, two of his paintings were accepted for exhibition at the Royal Academy. Cole spent the years 1857-9 in the village of Albury in Surrey, where he and his wife and children were joined by the landscape painter Benjamin Williams Leader. Cole returned to London, settling in Kensington in 1861 where he remained for the rest of his life, although he travelled annually in search of subject matter. He was elected an associate of the Royal Academy in 1870, and a Royal Academician in 1880.

From the beginning of his career, Cole was accustomed to close study of nature in the open air. In the 1860s he was influenced by the Ruskinian ideal of a highly detailed treatment of nature, although his compositions remained conventional. In Scene in North Wales the heather and ferns in the right-hand foreground are rendered in great detail, while the balance of sunlight and deep shadow, calm hillside and rushing stream are carefully composed to complement each other.

The twin peaks in Cole's Scene in North Wales suggest that the mountain represented is 'Y Lliwedd' in Snowdonia, with Snowdon wreathed in cloud in the right background. The popular pictorial image of Snowdonia was invented by the Welsh landscape painter Richard Wilson (1713/14-1782) in the 1760s; however, the landscape became much more accessible from the 1840s, especially after the arrival of the railway at the coastal resort of Llandudno in 1848 encouraged large scale tourism from Liverpool and further afield. David Cox (1783-1859) visited Betws-y-Coed (the gateway to Snowdonia) to paint every year between 1844-56, encouraging many other artists to work there. In 1863 the railway line linking Llandudno Junction with Betws-y-Coed was begun, but was only completed in 1868, so Cole presumably got there by road. He did not exhibit any identifiable views of North Wales at the Royal Academy, which suggests that Scene in North Wales might have resulted from a single visit.

Cole was one of the most widely popular artists of the second half of the nineteenth century, and retained his popularity, mainly through the medium of colour reproductions and greetings cards, for much of the 20th century. His work is always rewarding to the eye, if seldom surprising; he knew his market, and was perhaps understandably reluctant to abandon a successful formula. 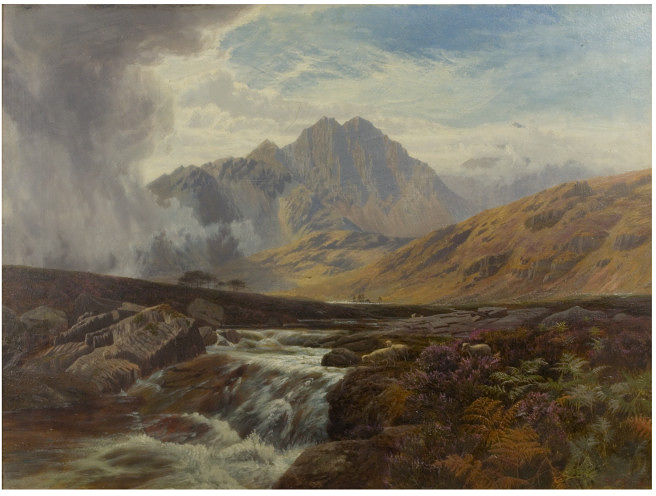