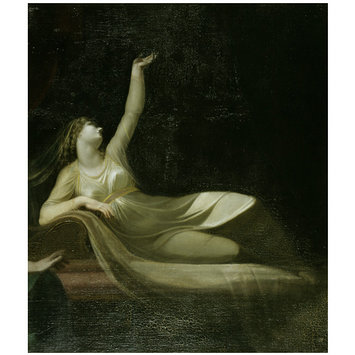 This painting is probably a fragment of a destroyed composition commissioned by Thomas Macklin in 1779 for his Poets' Gallery. The subject matter is taken from Shakespeare's Henry VIII (Act 4, scene 2) and shows the death of Queen Katherine. The Queen is here shown on her deathbed, raising her arms towards the hovering figures above her, which are shown in another fragment (see 1386-1869). This scene of emotional intensity is a fine example of Fuseli's wide-ranging imagination and favourite subject matters based on the supernatural, fairy mythology and demonic superstition.

A female figure wearing a classical dress and a veil lyies on a bed and raises her arm.

Oil on canvas backed with millboard

Historical significance: This painting is a fragment of a picture representing the dream of Queen Katherine (Shakespeare, Henry VIII, Act Iv, scene 2) commissioned in 1779 by Thomas Macklin (c. 1760-1800) for his Poets' Gallery. The final composition is only known through an engraving made by Francesco Bartolozzi (1728-1815) in 1788, which was much criticised by Fuseli.
Between 1779 and 1788, Fuseli executed a series of works and studies for this composition. The present fragment constitutes the central section of the painting believed to be the original version engraved by Bartolozzi whereas another fragment (1386-1869) constitutes its upper right part. There is another version of the same subject currently in the Flyde Borough Council (Lancashire), which was commissioned by Sir Robert Smith, Bart (1744-1802) and exhibited in 1781 at the Royal Academy.
A preparatory study for the latter version can be seen on the reverse of a drawing showing 'Bacchus as a child' in the Kunsthaus, Zurich.
In Shakespeare's Henry VIII (1613), Act 4, scene 2 shows the dying queen Katherine of Aragon (1485-1536) who was the catholic wife of the King until their divorce in 1533 so as to allow the King to marry Ann Boleyn. The Queen dreams on her deathbed of the 'spirits of peace' departing from her and raises her arm towards the hovering figures. The composition probably inspired William Blake for his own version of the theme (dated 1807) currently in the Fitzwilliam Museum, Cambridge.
In 1788, Macklin issued a prospectus for 'One hundred pictures / Prints illustrative of the most celebrated British Poets ... with letter-press explanatory of the subject, extracted from the writings of the respective poets.' A copy is held at the National Library of Wales. 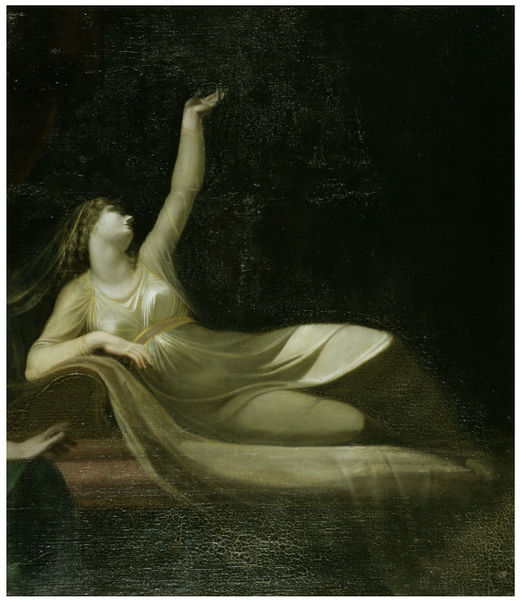