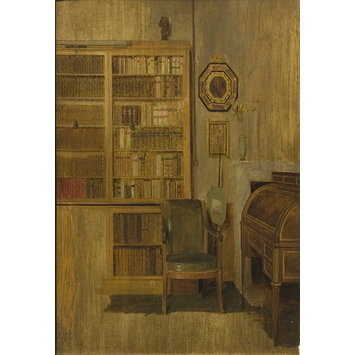 A Book Case (sketch for 'The Letter of Introduction')

Historical significance: Sir David Wilkie R.A. (November 1785-1841) was born at Cults, which is about twenty miles north of Edinburgh. His father was the minister there and his maternal grandfather owned the mill at Pitlessie. His formal artistic training began when he was fifteen and his family sent him to the Trustees' Academy in Edinburgh; this was the earliest publicly funded art school in Britain. He moved to London in 1805, and first exhibited at the Royal Academy in 1806 at the age of only twenty. His painting "The Village Politicians" was a sensation and he was immediately something of a celebrity. He went on to become internationally recognised, his paintings of everyday life, with strong narrative themes, peopled with expressive characters and packed with eye-catching details, hugely popular with the public. He was made a full member of the Royal Academy in 1811, was appointed Painter to the King in 1830 and was knighted in 1836.

This is a study for the 'Letter of Introduction' (oil on panel, signed and dated, "D. Wilkie 1813"), which is in the National Gallery of Scotland. The finished work is catalogue number 12. in Nicholas Tromans, David Wilkie: painter of everyday life (exh.cat. London: Dulwich Picture Gallery, 2002), and is illustrated in colour. The finished painting shows an elderly man sitting in his study at his open bureau holding a letter, while a younger man stands and awaits his response, the old man's dog sniffing suspiciously at the visitor's knee. Tromans notes that it "tells the simplest possible story: two people meet and wonder what to make of one another. The younger man has called, rather too early, with a letter to justify his right to intrude written by some acquaintance of the older man, who is now going through the motions of opening and reading the note, apprehensive of what it might ask of him, and indeed of what he and his new friend are going to find to talk about for long enough for the visit not to become more of an embarrassment than it already is. Wilkie makes excellent use of the dog to recapitulate the theme of suspicion of the guest". As in many of Wilkie's most successful works there is a strong emphasis on the objects within the room, and this attention to detail is demonstrated in the V&A's careful oil sketch for the finished work.

The furniture in the sketch have been identified as follows:
1. The fitting above the doors of the bookcase is a map on a roller with tassels - these were often fitted to library bookcases at this period. The doors are filled with a metal mesh, a conventional technique used for security, and the bottom of the bookcase has a numeral, which suggests the owner had a catalogue for his books.

2. The green octagonal object on a stand is a pole screen, usually positioned to shield people from the heat of the fire. It looks as though there is a print mounted on the octagonal panel and the height of this panel can be adjusted by moving the clips on the back.

3. The octagonal mirror or picture is Italian late 16th or early 17th century with a surround possibly made of coloured marbles and looks like the kind of thing collected by a Grand Tourist. The frame below this appears to be mounted with specimens of beetles and other insects. Both the roll top desk and the armchair, with a traditional library/male top cover of leather, are French Empire and probably contemporary with the date of the sketch.

The wall light looks like ormolu, not carved wood. The bust is more typical of the kind of object found in libraries.

This is one of eight works attributed to David Wilkie (1785-1841) which were given to the Victoria & Albert Museum by to the collector John Sheepshanks (1784-1863) in 1857, only 16 years after Wilkie's death. But although Sheepshanks and Wilkie were contemporaries and Sheepshanks knew personally many of the artists whose work he owned, it seems likely that the works attributed to Wilkie in Sheepshanks' collection were not purchased directly from the artist .

Oil painting entitled 'Sketch of a Book Case for "The Letter of Introduction"' by Sir David Wilkie. Great Britain, 1813. 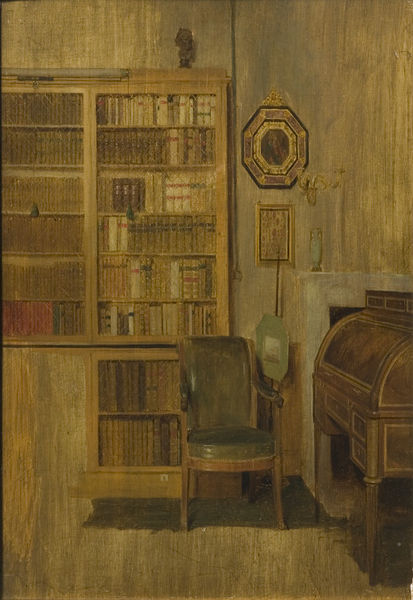