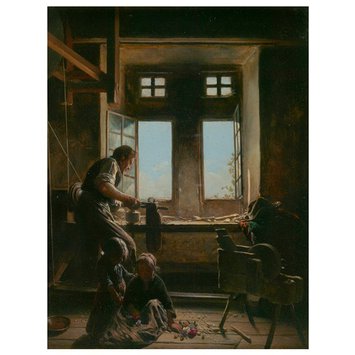 Joseph Hornung (1792-1870) was born in Geneva. He took drawing lessons with Constant Vaucher but was essentially self-taught in the French Romantic tradition. He was considered the leader of the Geneva school and the most representative painter of the Reformation. He exhibited at the Salon in the Musée Rath, Geneva, as early as 1826 and subsequently at the Royal Academy, London (1839) and the Paris Salon (1831, 1840, 1841, 1843 and 1847). He was praised by the critics and Louis-Philippe and Ary Scheffer were among his admirers.

This painting is a good example of Hornung's genre scenes. It shows the interior shop of a turner with his two young children playing on the ground with flowers. This pleasant scene is reminiscent of the Biedermeier imagery, ideologically opposed to academic and religious painting and which favoured such subject matter as portraits, landscapes and genre scenes.

Interior of a workshop with in front of a window wide open, a man is chiselling a piece of wood on a workbench; two young children play with flowers on the ground.

Historical significance: This painting is an interesting work drawing from the Romantic tradition and the Biedermeier imagery especially vivid in Germanic Europe. The humble subject matter is typical of 19th-century Western art, which developed a new interest in rustic subject matter under the revival of the Dutch 17th-century genre pieces. Here the subject may also allude to the Reformation ideology, in which Hornung seems to have been particularly interested. He produced indeed several works showing subjects from the history of the Reformation. See Calvin's farewell and Luther at the Worms graveyard, Musée d'art et d'histoire, Geneva.
His genre scenes were often inspired by the rustic life in Savoy (Alps) in compositions such as the present one of spatial arrangement quite similar to Interior with an old woman and children, Musée d'art et d'histoire, Geneva. 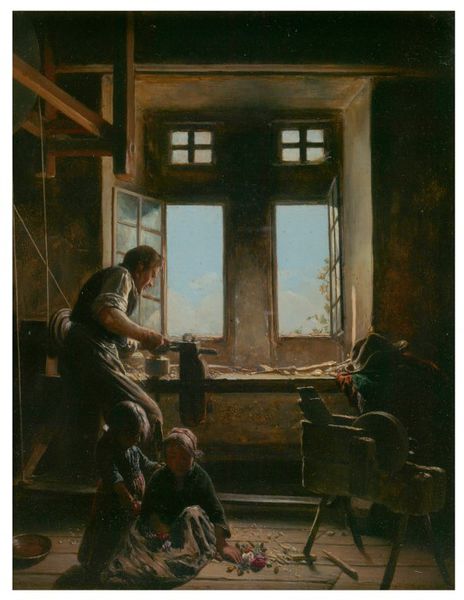