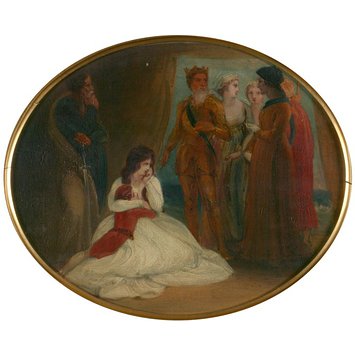 In 18th century Britain William Shakespeare's plays underwent something of a renaissance in popularity. A number of significant new editions of his work were published and the theatrical revival from the mid 18th century relied heavily on productions of his plays. Shakespeare had become associated with a rising British nationalism, which led also to a growing interest in British history. This tendency was exploited by both John Boydell's Shakespeare Gallery, and by Robert Bowyer's Historic Gallery. Boydell was an engraver and publisher who commissioned oil paintings for exhibition, with the intention of generating interest in printed versions. He began the project in 1786, which led to an illustrated edition of Shakespeare's plays, and a folio of prints. It is not clear whether Stothard exhibited finished oil paintings in Boydell's gallery, but he contributed designs to both the Folio and the Illustrated edition; unfortunately the subject matter of the V&A's paintings of Shakespeare by Stothard do not match any of these works. Bowyer originally commissioned images for an illustrated edition of David Hume's History of England, but following Boydell's example, he placed original paintings on display in his Historic Gallery. Stothard had produced illustration's to an earlier edition of Hume, published by Thomas Cadell, and for Bowyer's gallery he painted a exceptionally large version in oil of his printed headpiece of the murdered princes in the tower.

It remains unclear therefore as to whether this small oil painting is a sketch for a printed illustration or is a finished oil intended primarily for display and sale. On the one hand the image has so far not been matched to a finished print or illustration, and modesty of scale and even a somewhat sketchy nature seems to be no indication of function - large scale oils were rare in Stothard's oeuvre. On the other, Stothard was so prolific as an illustrator and designer that it may yet prove to be a design for an illustration.

The museum's title for this small oil painting is Constance and Arthur, and it seems plausible that the subject is taken from Shakespeare's King John, Act III, Scene 1; Constance, speaking to her son Arthur and Salisbury, rages against the marriage of Blanch and 'Lewis' [the Dauphin] "... I will instruct my sorrows to be proud; / For grief is proud and makes his owner stoop. / To me and to the state of my great grief / Let kings assemble; for my grief's so great / That no supporter but the huge firm earth / Can hold it up: here I and sorrows sit; Here is my throne, bid kings come bow to it." As Constance sits at the end of this speech, other characters enter; King John, King Phillip, Lewis, Blanch, Queen Elinor etc. To the left of the seated figure in Stothard's painting is an elderly man, plausibly Salisbury, and to the right, as if entering through a tent opening, are 5 figures, one of whom is plausibly King John.

The Life and Death of King John is today one of Shakespeare's less well-known plays. It is a history play, and Stothard's interest in such subjects reflects his awareness of the audience both for Shakespeare's plays and for scenes of British history, which both Boydell and Bowyer exploited with their respective galleries and publications. In the late 18th and 19th centuries this play was apparently one of Shakespeare's most frequently performed plays, primarily because the pageantry and spectacle of the play suited the taste of that time. The play dramatizes the reign of King John of England (reigned 1199-1216), the son of Henry II and Eleanor of Aquitaine, younger brother of Richard I, and best known for his role in Magna Carta, which however is not mentioned in the play. Arthur of Brittany was the nephew of the King, and Constance was the widow of Geoffrey (John's elder brother) and mother of Arthur. When Richard I died without an heir some regarded Arthur as the rightful king. Arthur fought John for the throne, with the support of the French King, but was defeated and captured by John's army and imprisoned at Falaise and later Rouen. It is not known what finally happened to Arthur, but it is assumed that he was murdered by or on behalf of John. 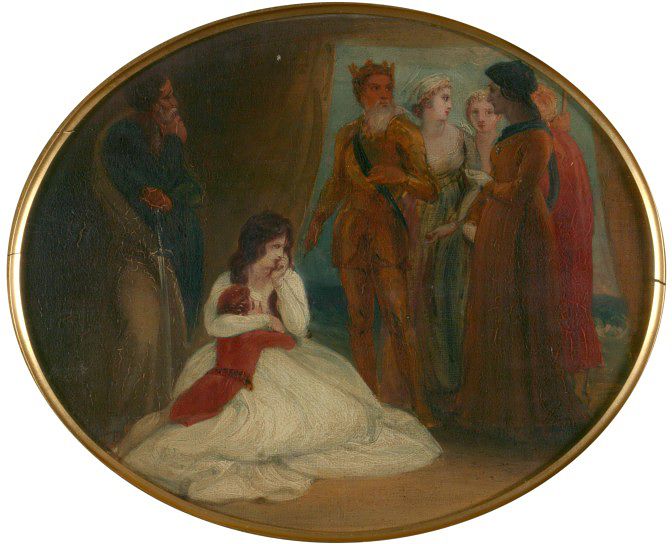