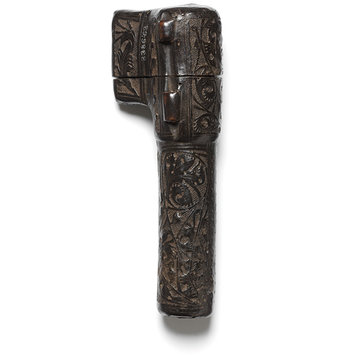 The high value of personal possessions encouraged the use of protective cases of all shapes and sizes. These were moulded and stitched in leather, and were close-fitting and light-weight. They are exceptionally durable, and have often outlasted the contents, such as quill pens, ink wells, books, cutlery, and other personal possessions. Such cases are sometimes depicted in 15th-century paintings and manuscript illuminations. Integral loops allowed the lids to be secured with a cord or thong, by which smaller cases could be carried on a belt for convenience. They could be intricately decorated with fashionable ornament, personalised inscriptions and colour.

This case probably held a penknife and at least one quill pen. Medieval illustrations of leather pen cases in use (by both scribes and members of the nobility) tend to show them attached by cords to an ink horn in its own moulded leather case. The combination could have been easily carried, either worn at the waist or - in the case of scribes - worn around the neck as a badge of office.

Pen case and lid of moulded leather (cuir bouilli). Of cylindrical form with an extending cavity at the top. The whole case cut and embossed with compartments of scrolling leaf pattern on a punched ground, divided by elongated narrow panels of thistle leaf. On the end of the lid is

There are four loops integral to the case and cover, through which a cord (now missing) originally ran

Notes on construction
A stretched inner liner; the outer worked cover consists of a foot cover (stretch/shrink marks) and a wraparound section.

Bought for 16s.8d; no further information on register.

Described on acquisition as a case for pens and ink (aka a penner). The case incorporates an unusual fin near the opening, which presumably accomodated a narrow protrusion of some kind. Medieval illustrations of leather penners in use (by both scribes and noble men and women) tend to show the long penner (for a pen-knife, and presumably at least one quill pen, for convenience) attached by cords to an ink horn in its own moulded leather case. The combination could have been easily carried, either worn at the waist, or - in the case of scribes - worn around the neck as a badge of office.
See: Writing implements and accessories : from the Roman stylus to the typewriter, Irene Whalley, 1975, pp. 187-8; Western writing implements in the age of the quill pen, Michael Finlay, 1935, pp.35-6, p.138