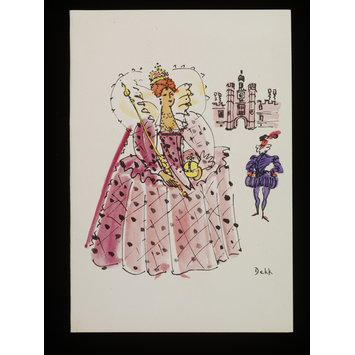 Illustrator and designer Dorrit Dekk (1917-1961) designed a number of dinner menus for P&O during the 1950s and 1960s. Originally from Czechoslovakia, Dekk moved to England in 1938 to study advertising design. She designed for companies such as P&O, London Transport, British Rail and the Post Office (GPO), and in 1951 she designed the Sports and Games section of The Festival of Britain. She was also a book illustrator and her work included a series on the Queens of England, written by Ralph Lawrence.

Printed dinner menu for the Orient line S.S. 'Oronsay', dated Saturday, 31st October, 1953. The card is folded once vertically. On the front is a printed image, from an illustration signed by Dorrit Dekk, depicting Queen Elizabeth I.

Queen Elizabeth is dressed in pink and holds sceptre and orb. Behind her stands a man in purple with pink feather in his hat. The gate-tower of a castle, in pink, is in the background.

The text on the back of the menu card, printed in black in a serif font, some in italics, gives a biography of Queen Elizabeth I. In two boxes, both with a red decorative border, say that this is the second of a series of six menus with sketches of the Queens of England who successed to the throne in their own right; others in the series are listed.The headline 'Queens of England' is in a red decorative font. 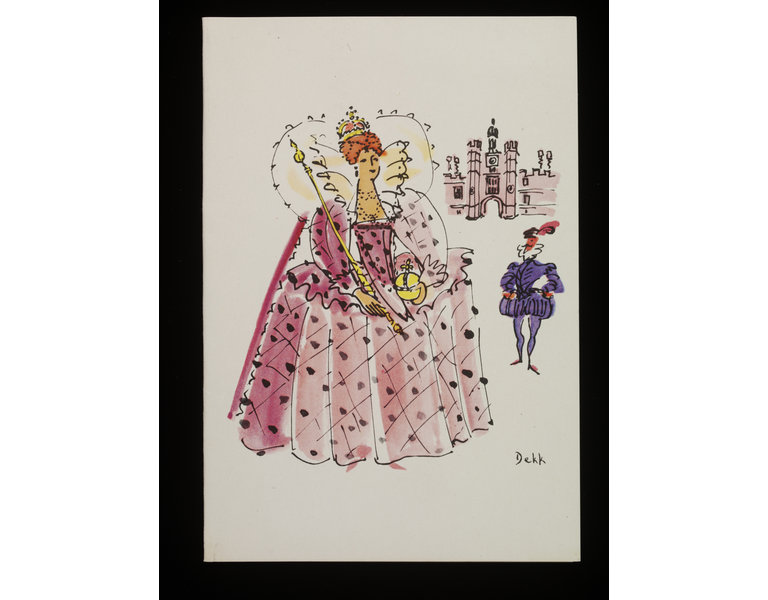