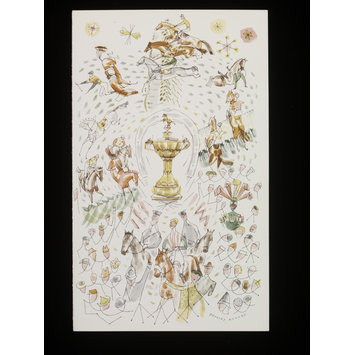 Douglas Annand (1903-1976) was a designer and leading light of Australian modernism. From the 1930s he designed the corporate images for some of Australia's largest companies, including the Orient Line (later P&O). Based from 1930 in Sydney, he also produced magazine covers, advertisements, labels, wrapping papers, and textiles. He is well known for his large public mural work, which earned him the Sir John Sulman award in 1941, 1947 and 1951; one of these was for a mural for Orient Line headquarters.

Printed dinner menu for the Orient line S.S. 'Oronsay', dated Wednesday, 28th October, 1953. The card is folded once vertically. On the front is a printed image, from an illustration signed Douglas Annand, depicting the Grand National at Aintree.

The image is printed from an outline drawing coloured in pastel washes in pink, several shades of green, brown, orange and grey. The perspective is set as though viewed from above. In the centre is a trophy. The race is taking place and the image design sets the hedges around a horse-shoe. The botom half of the image shows the winner on his horse escorted by mounted guards and surrounded by celebrating crowds, all wearing an variety of hats. Most are merely outlines of head and hat shapes with very few features shown. One man holds a bunch of yellow flowers and the crowd also includes two policemen and a jester, who is black.

The text on the back of the menu card, printed in black in a serif font, describes the Grand National and Aintree race-course. This is headed with an italic headline font 'Orient Line' and 'Randwick'. At the bottom, in a smaller italic font, is text mentioning that this is one of a series of seven impressions of race courses by the same artist; the V&A has one of the others, 'Randwick', E.355-2005. Separating the two headlines and the two texts is a pink star. 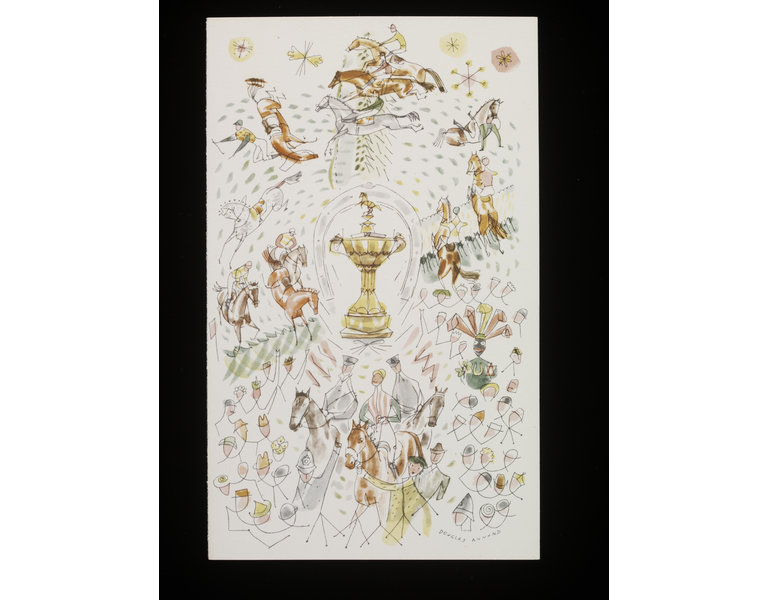