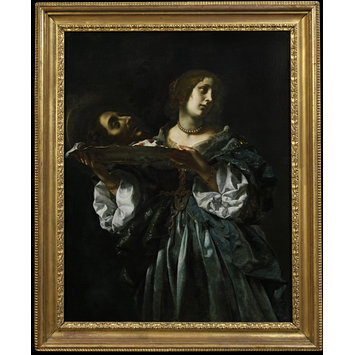 Salome (or Herodias) with the Head of John the Baptist

Carlo Dolci (1616-1687) was born in Florence and entered the studio of Jacopo Vignali (1592-1664) in 1625 and probably also studied Netherlandish painting. He developed an extreme attention to details and specialised in the production of highly refined and intensely religious pictures. In 1648 he became a member of the Accademia del Disegno and received many commissions. Duke Cosimo III de Medici patronized him throughout his career. He had a large studio and taught his daughter, Agnese, who was also a painter. After the arrival of Luca Giordano in Florence in 1682, whose style was entirely opposed to that of Dolci, Dolci's reputation declined and his psychological balance deteriorated while he was already suffering from depression. Dolci's works were highly praised by the English aristocracy as early as the 17th century but during the 19th century English writers such as John Ruskin attacked his reputation that remained low until the 1960s.

This painting is most likely an autograph work by Carlo Dolci, dated ca. 1665-70. It shows Salome, the daughter of Herodias, holding out the head of St John the Baptist on a silver plate while she is looking away. This picture is a good example of Carlo Dolci's painstaking execution, attention to detail and taste for highly refined ornaments that characterised much of his art.

On a dark neutral background, Salome (although it is also registered as being a portrait of her mother Herodias) is holding out the haloed head of St John the Baptist on a silver plate while looking away towards the right. She is wearing a lavish silk dress with large puffed sleeves in white and two tonalities of blue, decorated with jewelled belt and brooches, and a pearl necklace.

Historical significance: According to Filippo Baldinucci, the author of a biographical dictionary of artists, Notizie de' professori del disegno da Cimabue in qua (1681-1728), Dolci painted three versions of this subject: the first for Marchese Pier Francesco Rinuccini (whereabouts unknown), the second for John Finch, an English resident in Florence, who presented it to Charles II (Royal Collection, London). There is no evidence of the third one, however two other versions are respectively in the Phoenix Art Museum and in the Gemäldegalerie Alte Meister, Staatliche Kunstsammlungen, Dresden, while a studio copy of the same composition is in the Museum of Fine Arts, Boston. A print after Dolci's composition was engraved by von William French during the 19th century.
The story of Salome and St John the Baptist is told in the Gospels (Matthew, 14:3-12 and Mark 6:17-29): Salome (Herodias' daughter) danced before the King Herod (her paternal uncle) and is offered whatever she would ask as recompense. Following the recommendations of her mother, whose relation with the King was denounced as incestuous and adulterous by St John the Baptist, she asked for the head of the saint. Salome is shown here in an elegant 16th-century dress, holding out the haloed head on a silver plate but looking away, perhaps realising suddenly the consequences of her terrible request. Salome's gesture illustrates well the emotive rendering in religious subjects the painter was famous for.
This painting is a good example of Dolci's mastery in capturing details of lavish textiles, precious jewellery, and in rendering the subtle modelling of the face and hands' flesh. Set against a dark neutral background, the figure of Salome is dramatically illuminated by a chiaroscuro effects recalling somehow the caravaggesque realism. Dolci conveys the marvellous texture of her blue silk dress, the vaporous volume of her sleeves and the shining stones of her jewels that echo the silver plate's glow.
According to Baldinucci, the original painting may have formed an ensemble with two other companion paintings: Mary Magdalene also in the Royal Collection, London and David with the Head of Goliath, probably the version housed in Pinacoteca di Brera, Milan.

History painting, i.e. depictions of non recurring events based on religious, classical, literary or allegorical sources, particularly developed in Italy during the Renaissance (15th-16th centuries). History painting could include religious themes, or depictions of momentous recent events, but the term was most frequently associated with Classical subject-matter. However a renewed impetus was given to religious subjects after the Council of Trent (1545–63), which stipulated new iconographical programmes. The development of art treatises, in which the compositional rules guiding the art of painting were discussed also notably, influenced the evolution of history painting. From around 1600 history painting’s principal rivals: still-life, landscape and genre painting began to emerge as independent collectable genres. Furthermore, the Rococo taste for the ornamental in the early 18th century prioritised the decorative quality of history painting, so that subject matters became more entertaining than exemplary. There was a renewed interest in history painting during the Neo-Classical period after which the taste for such pictures faded towards the end of the 19th century when an innovative approach to the image was led by the Symbolists and was developed further by subsequent schools in the early 20th century.

Oil painting depicting 'Salome (or Herodias) with the Head of John the Baptist' by Carlo Dolci. Italy, ca. 1665-1670. 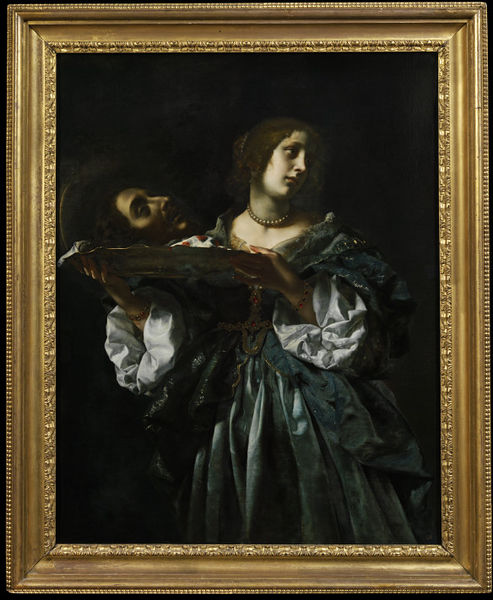