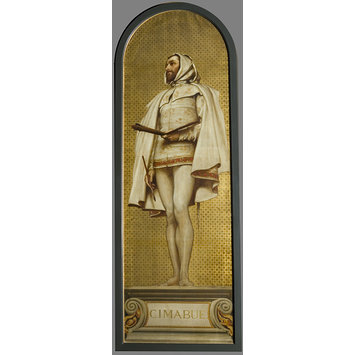 Giovanni Cimabue: design for a mosaic in the Museum (the 'Kensington Valhalla')

Historical significance: Giovanni Cimabue (fl.1272; d. before 14 July 1302) was a Florentine painter and mosaicist. Together with the younger Duccio and Giotto, he was one of the pioneering artists of the early Italian Renaissance, who introduced a greater degree of naturalism to painting. His surviving works include the apse mosaic of 'Saint John the Evangelist' in the Duomo (cathedral) in Pisa of 1301 and 1302; the Santa Trinita 'Maestà' (about 1280, Uffizi, Florence); frescoes in the Lower Church of S. Francesco, Assisi; and the now ruined 'Crucifix' in Santa Croce, Florence. Cimabue's works represent a crucial moment in the history of art when Italian painters, while still influenced by Byzantine painting, were exploring the naturalistic depiction of forms and three-dimensional space.

Frederic Leighton was born in Scarborough in 1830, the son of a physician. After receiving an all round education, he studied art at Frankfurt under Steinle, and at Brussels, Paris and Rome. In 1852 he began to work independently and spent the next three years in Rome.

Leighton settled in London in 1859, though he frequently travelled abroad; he was elected ARA in 1864 and RA in 1868, and attained the Presidency of the Royal Academy in 1878. He was the most influential of the Victorian Classical painters, and an important exponent of the 'subjectless' painting associated with the Aesthetic Movement, in which pictorial narrative is suppressed in favour of beauty and atmosphere. Leighton died on 25 January 1896 and is buried in St. Paul's Cathedral.