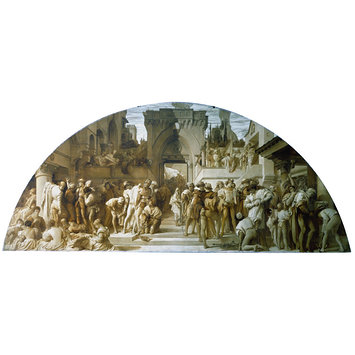 The South Kensington Musem, now the V&amp;A, was founded to promote the ‘industrial arts’ – designed and manufactured objects – by displaying the finest historical and contemporary examples. Leading Victorian artist Frederic Leighton was commissioned to paint two frescos (Museum nos. SKM.19 and SKM.20) on that theme for the South Court, a vast two-storey glass roofed gallery which was then the centrepiece of the Museum. Leighton used a complex process for designing and painting the fresco. It involved a number of stages and years of work. First, he drew a sketch to establish overall composition. Then he made a highly finished drawing, for approval from the Museum. Once approved, students from what is now the Royal College of Art copied the design onto two canvases smaller than the lunette where the finished freco would be painted. Leighton used these to work out the colour scheme by painting small colour oil sketches (Museum nos. 992-1873 and 993-1873) and made larger monochrome cartoons like this one to establish areas of light, shade and volume. Finally, the students enlarged the finished design onto this huge canvas the same size as the lunette. This was used to transfer the design onto the wall, before Leighton began painting the fresco.

Oil painting. Lunette of exterior scene of a crowd of people standing on steps beneath and around a pointed archway in monochrome. More than 30 life-size noblemen and servants are visiting an armourer's yard beside the fortified gateway of an Italian city.

Commissioned for the decoration of the South Kensington Museum.

This is the half-size monochrome oil sketch Leighton made in preparation for the fresco The Arts of Industry as applied to War between 1870 and 1872.

Historical significance: Frederic Leighton was born in Scarborough in 1830, but his family travelled extensively in Europe during his childhood. After receiving an all round education, he studied art at Frankfurt under Steinle, and at Brussels, Paris and Rome. In 1852 he began to work independently and spent the next three years in Rome.

Leighton settled in London in 1859, though he frequently travelled abroad. His cosmopolitan knowledge of languages, literature and music marked him out as an exceptional figure in Victorian London, and he rose rapidly through the art establishment. He was elected ARA in 1864 and RA in 1868, and attained the Presidency of the Royal Academy in 1878. He was the most influential of the Victorian Classical painters, and an important exponent of the 'subjectless' painting associated with the Aesthetic Movement, in which pictorial narrative is suppressed in favour of beauty and atmosphere. Leighton died on 25 January 1896 and is buried in St. Paul's Cathedral.

In the 1870s and 1880s Leighton was commissioned by the South Kensington Museum (as the V&A was then known) to paint two large lunette paintings for each end of the South Court of the museum. The Arts of Industry as applied to War was painted between 1878 and 1880, and The Arts of Industry as applied to Peace was painted between 1884 and 1886. The complex story of the commission is told in Richard Ormond's book Leighton's Frescoes in the Victoria and Albert Museum, London, 1975, the full text of which is included here in the bibliographic field.

Oil painting, half-size monochrome cartoon for the spirit fresco, 'The Arts of Industry as Applied to War', by Frederic, Lord Leighton, oil on canvas, British School, 1870-72

Tim Barringer, 'The Leighton Gallery at the V&A: the context, conservation and redisplay of the South Kensington frescoes', Apollo, February 1996, 56-64
Richard Ormond, Leighton's Frescoes in the Victoria and Albert Museum, London, 1975

The following is the full text of the book:

The preparatory cartoon for the fresco War is roughly half the size of the finished fresco. It was used as the basis for enlarging the design to full-size. It also allowed Leighton to work out the volume of the figures and establish areas of light and shade.