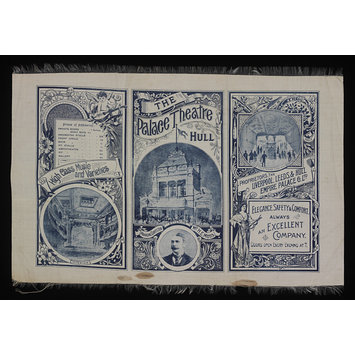 Silk programme for the Grand Opening Night of the New Palace Theatre, Hull

Silk programme printed for the 'Grand Opening Night' of the New Palace Theatre, Hull, 6 December 1897, featuring a Variety programme with among others Gus Elen, Lilian Lea, the Glenroy Troupe, the O'Malleys and Rose Elliott.

This theatre programme with its decorative panels and lithographic images of the theatre and the owner H.E. Moss, was made to be folded in three like a paper programme, but was in silk to commemorate the opening night of The Palace Theatre Hull, on 6th December 1897. This one of the music halls built by Horace Edward Moss (1852-1912) in the late 19th century, and was part of the group known then as 'The Liverpool, Leeds and Hull Empire Palaces Limited'. Later the group became known as the Moss Empires Variety Theatres, and at its peak comprised thirty-three theatres, the largest chain known in the world.

Designed by the prolific theatre architect Frank Matcham, the Palace was a sumptuous theatre featuring electric light and a sliding roof over the auditorium which seated 1,800. By 1897 over 40 theatres in Great Britain had been built to Matcham's designs, and in 1897 alone Matcham-designed theatres opened in Stoke Newington, Crouch End, Dublin, Hull, Nottingham, Aberdeen, Glasgow and London's Edgware Road. The Palace Theatre was enlarged in 1928 and closed in 1929, reopened in 1951, and renamed the Continental Palace in 1957. It finally closed in 1965 and was demolished the following year.

Silk programme in blue typography on cream silk, printed on both sides and made to fold into three. With lithographic images of the interior and exterior of the theatre, obverse, and the programme on the reverse, and an integral cream silk fringe top and bottom. For the opening night of the Palace Theatre Hull, a Moss Empires Theatre, 6 December 1897, featuring a Variety programme.

The centre front panel has a picture of the exterior front façade of the theatre with horse- drawn carriages drawing up to the canopied entrance, with a photographic image of Mr H E Moss, Managing Director below.

The right hand panel shows a view of the interior of the vestibule with the information in capitals: ‘Proprietors, The Liverpool, Leeds and Hull Empire Palace Co Ltd.’, and below: ‘Elegance, Safety & Comfort always and Excellent Company - Doors open Every Evening at 7' printed within a oblong panel with a classical figure to the left of a robed lady with violin. The left hand panel features an image of the auditorium, below, with a banner headline ‘High Class Music and Varieties’. Above is a panel giving the prices of admission ranging from from 1 guinea for a Box down to 4d for the Gallery, above which is a cherub playing a lute. The panel backgrounds feature flowers and scrolls.

The reverse of the programme is again in 3 panels, the left hand side: ‘Grand Opening Night Monday December 6, 1897’ with a line drawing of a boy in 18th century costume above, and the same information on the right hand panel, with a line drawing of a girl with a tennis racquet. The centre panel gives the title ‘New Palace Theatre, Anlaby Road, Hull’, the managers' names - Mr. H.E. Moss, Mr. Frank Allen, Mr. Alfred Graham and the name of the stage manager Mr. Alfred Stafford, and the names of the acts, with the information that the theatre is: ’one of the finest in the country with all the latest improvements - Electric Light, Sliding Roof, Fireproof Curtain etc. etc.’

This silk programme was printed for the Grand Opening Night of the Palace Theatre, Anlaby Road, Hull, 6 December 1897. This was one of the chain known then as the 'Liverpool, Leeds and Hull Empire Palaces Limited', the company owned by Horace Edward Moss. It was one of the chain of Moss Empires Variety Theatres that opened around the country between 1890 and 1912 when Moss died. 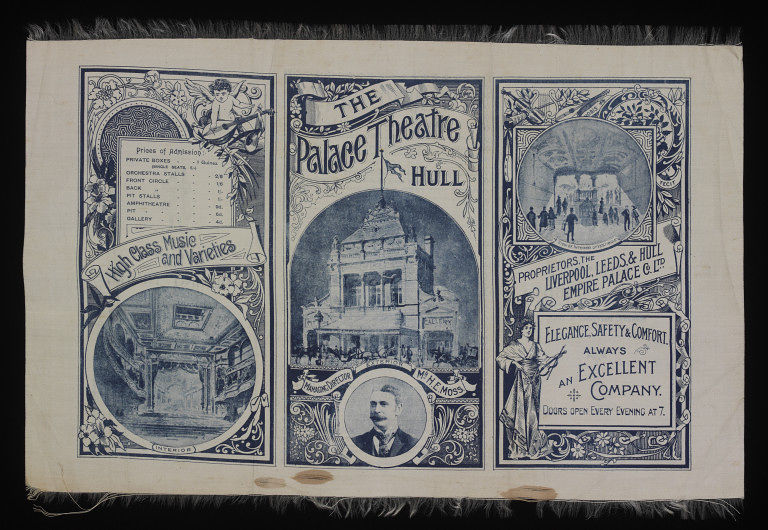