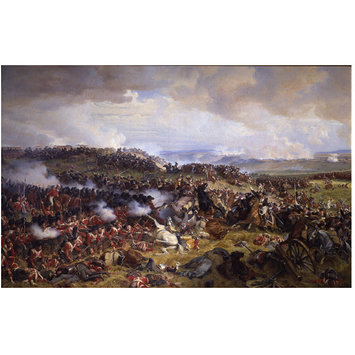 The Battle of Waterloo: The British Squares Receiving the Charge of the French Cuirassiers

Felix Philippoteaux (1815-1884) was born in Paris where he trained with Léon Coignet (1794-1880). He soon specialised in history and portrait paintings and started exhibiting at the Salon in 1833. He also produced battle scenes, some of them in a panorama format with the assistance of his son Paul Dominique Philippoteaux (1846-1876), who would be at the forefront of a new generation of panorama painters. Félix Philippoteaux was awarded the Légion d'honneur in 1846.

This painting is a fine example of Félix Philippoteaux' battle scenes, a genre in which he specialised with success. It shows the battle of Waterloo between the British army and the French Napoleonic army, which took place on the 18th June 1815. This very accurate representation of warfare tends to re-create the past, mainly the Revolutionary and Empire period. This type of representations draws upon 17th-century Dutch examples such as Philips Wouverman (1619-1668) and differs from the Realist interpretation of the subject.

Battle scene set in a hilly landscape: tangle of soldiers and horses with a canon in the right foreground, pervaded with smoke, under a large cloudy sky.

'F. Philippoteaux 1874'
Signed and dated by the artist, lower right

Historical significance: The present painting depicts the Battle of Waterloo, which took place on the 18th June 1815 in the South of Brussels (Belgium) and involved the British, Germans, Belgians, Dutch and Prussians against the French Grande Armée of Napoleon.
Commandant Lachouque (written communication) identified the scene as representing the British 5th Division under Sir Thomas Picton (1758-1815) receiving in square the 5th and 10th French Cuirassiers. On the right is represented the charge of the French cuirassiers with their blue uniforms at the British army in red on the left, clustered around the Union Jack held by two standard bearers.
Battle scenes in the 19th century draw upon a long tradition since the representation of warfare on Antique low-relief and its revival during the Renaissance, which reached its peak during the 17th and 18th centuries in Italy and the Netherlands.
Although 19th-century Realist artists developed a taste for military battles as an illustration of the Napoleonic campaign, they were more concerned with people and their sufferings. In this regard, Philippoteaux is closer to the art of Ernest Meissonier (1815-1891) who devoted himself to re-creating the past, chiefly of the Revolutionary and Empire periods with a meticulous attention to historical details.
Ruskin who saw the painting at the Royal Academy exhibition in 1875 praised it as a 'carefully-studied and skilful battle piece'. The museum also owns an oil sketch for this composition (P.1-1935).

Oil painting, 'The Battle of Waterloo: the British Squares Receiving the Charge of the French Cuirassiers', Félix Henri Emmanuel Philippoteaux, 1874 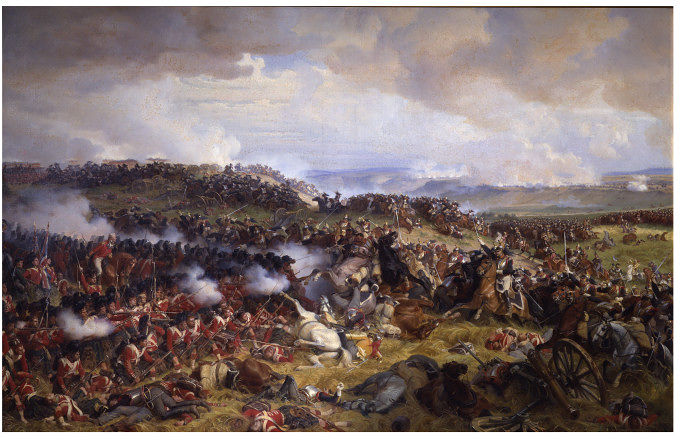