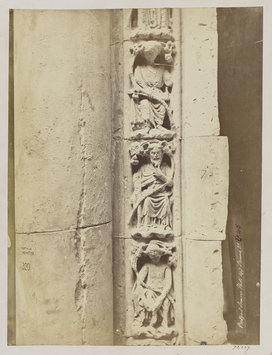 Album No. 1, Photographs taken from Specimens in Royal Architectural Museum

The photographs from this series are mostly of casts in the RAM; many of them are identified (Chartres, Rouen, Amiens, St. Albans, Wells, Hereford, Ely, Lincoln, etc). The casts include capitals, bosses, finials, brackets, rosettes, spandrels, etc. Many of the photographs capture signs wired onto the wall stating the source of the cast and name of the photographer. Bedford Lemere & Co. catalogue numbers scratched into the negatives are also occasionally visible. They were sold as sets (either mounted or unmounted), or singly, and marketed to architects, students and 'art-workmen'.

A mounted sepia-coloured photograph of plaster casts of architectural details.

In 1872 the V&A received an album of 60 photographs of the RAM cast collection by Bedford Lemere & Co. It included a title page describing the photographs as the 'first series of thirty' photographs of the Royal Architectural Museum collection. They were to be sold as sets (either loose or bound) or as single photographs. It was marketed to professionals, students and 'Art-workers'. The series viewed as an important educational resource and it is noted that 'Copies have already been purchased for several Art Libraries by Sir G. Gilbert Scott, R.A.' A hand-written inscription on the bottom of this page records that the album was delivered to the V&A by Scott. The V&A went on to acquire two duplicates mounted sets of 30 prints from this series in 1873 and subsequently, an additional two duplicate sets of 90 unmounted prints from the same series was made 10 June 1875. This loose photograph was probably acquired as part of these subsequent purchases.

Photograph by Bedford Lemere & Co., Westminster Chapter-House. 'The Root of Jesse' from the cast collection in the Royal Architectural Museum, albumen print, 1872 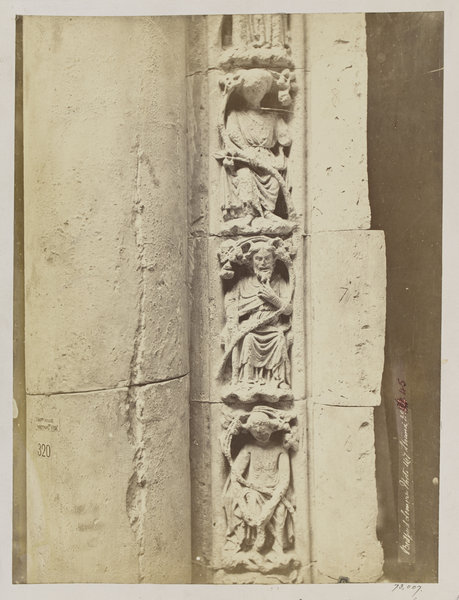