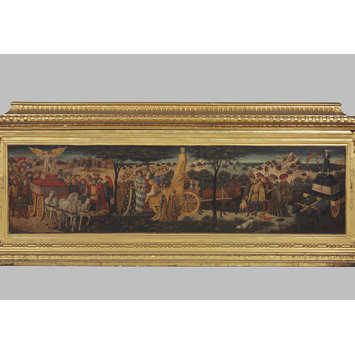 Cassone or marriage coffer: wood, carved and gilt on paw feet. The front and ends are painted with allegorical subjects in tempera on panel, depicting the Triumph of Love, Chastity and Death (front), Narcissus and Echo (side), Pyramus and Thisbe (side), a sleeping nude woman (inside the lid), stylised foliage (the back). On the inside, on the bottom is painted a naked sleeping woman.

The panels apparently restored and remounted in a new and heavily gilt chest.

Florence (and probably restored, made)

Historical significance: Thornton notes that it may have been what was referred to in one inventory as a 'forziere al'anticha grande storiato'

'…citizens of those times used to have in their apartments great wooden chests in the form of a sarcophagus, with the covers shaped in various fashions…and besides the stories that were wrought on the front and on the ends, they used to have the arms, or rather, insignia, of their houses painted on the corners, and sometimes elsewhere. And the stories that were wrought on the front were for the most part fables taken from Ovid and from other poets, or rather stories related by the Greek and Latin historians, and likewise chases, jousts, tales of love, and other similar subjects…'.

These lavishly decorated cassoni, often combined with pastiglia decoration, were generally commissioned in pairs. Florence, which specialised in the decoration of the front panel, was at that time the main centre of production, even though Siena and the Veneto also supplied cassoni. The painted decorations usually represented episodes from classical or biblical history or mythology appropriate for the newly wed.
The most flourishing cassone workshop in Florence was run by Marco del Buono Giamberti and Apollonio di Giovanni but major artists such as Domenico Veneziano and Botticelli may have decorated cassoni on occasion. Painted cassoni went out of fashion towards the end of the 15th century when carved oaken chests came into vogue.

“4639. ’58. Coffer or chest. Wood carved and gilt. A “cassone” or marriage coffer; the front and ends painted with allegorical subjects. Italian. 15th century. H. 3 ft. 1 in., L. 7ft 1 in., W. 2 ft. 7 in. Bought, 80l.
The principal painting is on the front, which is formed by architectural mouldings into a panel or framed picture. It is a marriage coffer for a bride’s dowry. The subject of the painting consists of three processions representing, feverally, the triumph of Chastity, the triumph of Love, and the triumph of Death. The central group is the triumph of Chastity. Chastity, in the person of a beautiful bride herself, stands erect on the triumphal car. She is crowned with a wreath of white ﬂowers and the car is draped with cloth of gold. It is drawn by unicorns, an animal emblematic in the middle ages of virginity. It was supposed that only a virgin was able to catch the unicorn. If she sat in the forest, the unicorn would run to her and lay its head in her lap; hence that ﬁgure had a religious significance that was variously applied. Here they are the servants of virginity and draw the car of chastity, which is waited on by groups of virgins all splendidly arrayed. Love blindfolded is bound to the back of the car. Over him chastity is triumphant.
Behind this group follows the triumph or procession of Love. He stands and drives a car drawn by white horses, and round him are groups of young gallants. All these are dressed in the utmost extravagance of the fashion of the day, as may be seen by the extraordinary developments of turban and head gear, constantly changing and worn by the exquisites, the “brigata spenderecchia” of the day. The car of Love is in pursuit of the car of Chastity. When this latter is overtaken, Love, as we have seen, is vanquished and bound captive to the bride’s equipage.
In the left-hand corner of the picture meeting these joyous processions is the triumph of Death. A car or hearse covered with a black pall and drawn by buffaloes is driven by Death, a skeleton ﬁgure in a loose robe with long hair blown backwards. In his right hand he holds his scythe, of which the broad blade, streaming red with blood, glares against a stormy sea and sky behind. The whole composition has a landscape background, the ground being light or sand coloured, with groups of trees, ﬂowers, &c. Figures, horsemen, and little dogs are seen in various parts, and the sky and sea occupy the upper part and form a solemn graduated blue green or green blue background to the ﬁgures where they stand out against it. The colours of the sea are greened over by time and perhaps by the yellowness of the varnish. The painting is a work of great seriousness and of much artistic merit. The elaborate decoration of the dresses reminds us of the paintings of Gentile da Fabriano, though there is more grace and less of his vigour in the heads and faces.
The two ends are also painted and represent the sorrows and misfortunes of unsuccessful love, under the familiar episode of the loves of Pyramus and Thisbe. These personages wear the dress of the day with some attempt at the classical kilt or skirt, but the hero has his hair crimped and standing out all round his head in the manner of the cauliﬂower perukes of later days.
The inside is lined with velvet and furnished with receptacles for jewellery and toilet articles. There are bands of spiral twists as border decorations. The inside of the lid is painted with a female ﬁgure recumbent and absolutely nude. This is well designed. Round is a border of mousetraps.
Portions of the ground round is painted in imitation of damask and the same decoration is employed on the top outside.
The hinges are a series of iron loops at frequent intervals, linked together; a primitive contrivance in frequent use still in oriental countries.”

“It is architectural in character and of a type which makes its appearance during the third quarter of the 15th century. It is probably Florentine and bears delightful scenes on its sides as well as one of those symbolical Triumphs so much in favour at the time. Inside the lid, however, is a remarkable painting of a nude reclining on a velvet cloth and cushion. The whole scene is curiously framed with trompe l’oeil renderings of blocks in perspective.”

MARRIAGE CHEST (cassone).
Wood painted in colours and gilt.
The front painted after Petrarch’sTrionfi with the Triumph of Love, the Triumph of Chastity, and the Triumph of Death, attributed to the ‘Cassone Master’, perhaps Marco del Buono. The ends illustrating the stories of Narcissus and Pyramus & Thisbe, attributed to the ‘Paris Master’.
Inside a figure of a woman perhaps Helen of Troy by the same hand.
FLORENTINE; about 1440.
Re-gilt and in part re-painted.
4639-1858.
[1930] 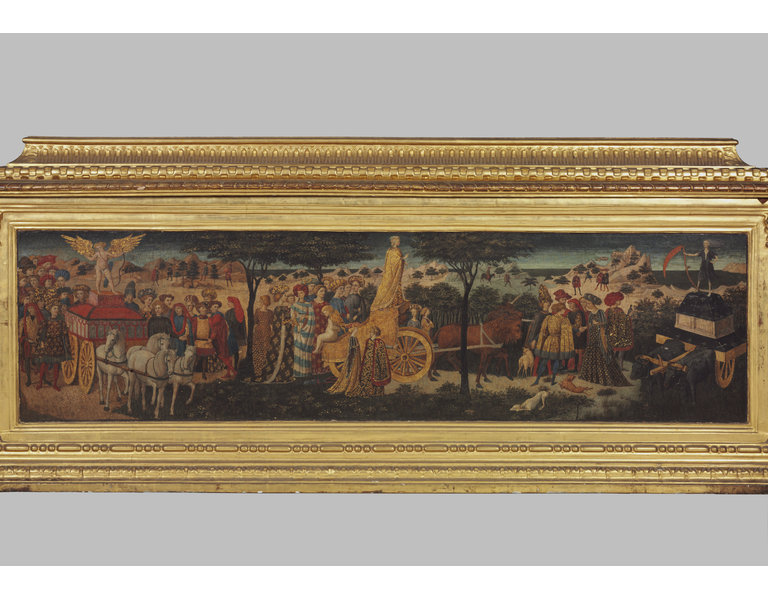