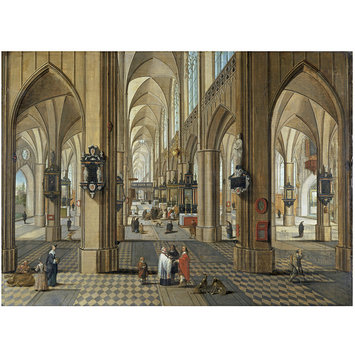 Pieter Neefs (1578?-1656/61) was born in Antwerp and probably trained with Hendrick van Steenwijk the Elder (ca.1550-1603) or Younger (ca. 1580-1649). In 1609, he became a master in the Antwerp Guild of St Luke and specialised in the depiction of highly detailed churches' interiors, which figures were sometimes painted by other artists such as Frans Francken II. His sons Lodewijck (1617-1649?) and Peeter II (1620-after 1675) seem to have been employed in his workshop and imitated their father's work.
This painting is a typical example of Neef's large output of architectural paintings representing church interiors. As a native of Antwerp, he particularly favoured to depict the interior of its catholic cathedral, Our Lady, that enables him to show his perspective skills and the daily activities of his contemporaries.

Interior of the Antwerp cathedral by daylight with many figures: elegant ladies and gentlemen, priest, beggars, children and even dogs. In the central nave a group of people kneel before a priest who celebrates a Mass at an altar.

'Peeter Neeffs'
Signed by the artist on the right hand pillar

Historical significance: The depiction of the interior of the catholic Antwerp cathedral, Our Lady of Antwerp, was the favourite subject of Pieter Neefs the Elder and his son, who produced a large number of versions that differ only in details. The present painting can be compared to a very similar composition in the Royal Collection, London The interior of Antwerp cathedral by day dated ca.1640 (RCIN 405488). The same dating is attested by the costumes.
The 15th-century Gothic church offered many pictorial interests to the artist that was famous for his attention to details. Structured upon seven naves, the construction started in 1352 and the whole architecture looks totally gothic in style, however, in the central nave, a succession of altars made of ebony, white and pink marble and a number of tabernacles on the pillars bears essential baroque characteristics. This combination of style increased by the crowd in early 17th-century costumes offers a wide range of variations for the painter. In addition, the altars appear surmounted by large altarpieces which colours echo the bright enlightenment of the whole picture. Neefs was particularly attentive to the soft transition between light and shade he was able to achieve even through the representation of bright daylight. His extreme attention to detail is revealed in the painstaking depiction of each decorative elements of the church such as the tabernacles on the pillars and the richly ornamented altars.
Neefs' prolific output of church interiors reflects the evolution of the art market in the Netherlands where the burgomasters were more and more interested in the acquisition of paintings representing their daily activities and social range.

Architectural paintings, i.e. paintings in which a building or a group of buildings or ruins constitutes either the main subject of the composition or plays an important role in it, in the Netherlands began in the 16th century, especially in the virtuoso perspective views of such artists as Hans (1527-1606) and Paul Vredeman de Vries (1567-after 1630). Architectural paintings include views of church interiors, both real and imaginary; interior and exterior views of imaginary palaces and, occasionally, country estates as well as exterior views of important buildings, such as cathedrals, town halls and country houses. This genre painting particularly flourished during the 17th century when artists such as Pieter Saenredam (1597-1665), Emmanuel de Witte (ca.1617-1692), Jan van der Heyden (1637-1712) and Job (1630-1693) and Gerrit Berckheyde (1638-1698) produced detailed representations of actual and fantasy architecture as main subjects of their compositions. Pieter Saenredam is generally regarded as the artist whose depictions of actual church interiors established a new genre in Dutch painting even though important precedents occur in the work of other artists such as Hendrik van Steenwyck (ca.1550-1603). Saenredam's pictures however obtained the favours of the art market that enable him and contemporary artists such as Pieter Neefs the Elder (1578?-1656/61) and the Younger (ca. 1580-1649) to support a career largely devoted to this speciality. 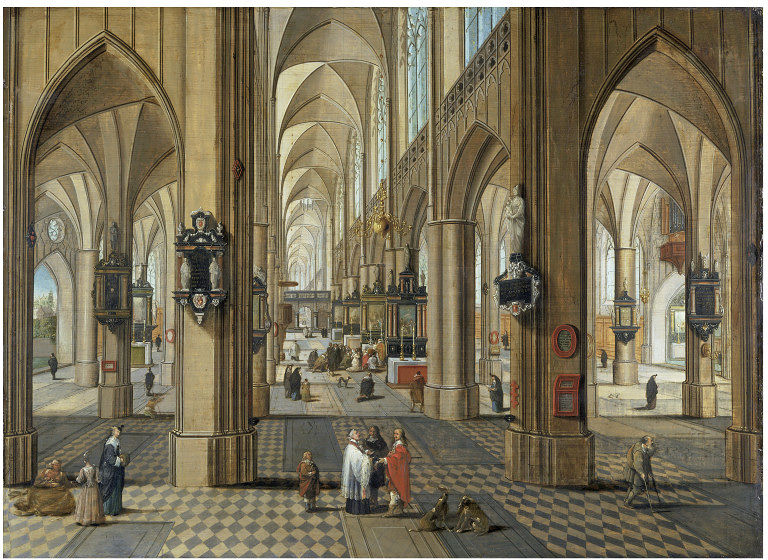