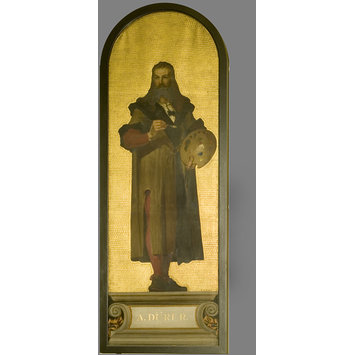 Albrecht Dürer: design for a mosaic in the Museum (the 'Kensington Valhalla')

Full-length portrait of Albrecht Dürer, beared with shoulder-length hair he holds a paintbrush and an artist's palette.

Historical significance: Albrecht Dürer (1471-1528) has come to be seen as the archetypal Renaissance artist of Northern Europe, celebrated for his remarkable powers of observation and his ability to render exact and meticulous detail in his studies from the life. A man of great intellectual curiosity, he was deeply interested in the science of proportion and perspective. He visited Italy, where he was influenced by Mantegna, Leonardo and Giovanni Bellini. His prints in turn influenced Italian artists.

The portrait derives from prints after Dürer's famous self-portrait at the age of 28 (Alte Pinakothek, Munich), although Fisk has introduced a subtle contraposto, turning the artist's head slightly to one side as he holds a palette and paintbrush, as though he is in the act of observing the subject of his painting.

William Cave Thomas also produced a portrait of Dürer for the Valhalla series; however, for some reason neither Cave's nor Fisk's designs were converted into mosaic.

William Henry Fisk (1827-1884) was a landscape and historical genre painter and drawing teacher. He exhibited at the Society of British Artists, the Royal Academy and the British Institution between 1846 and 1873.

In 1849 Fisk was one of the first of a number of watercolourists invited to Balmoral to paint views for Queen Victoria. The Queen chose four of Fisk's views of the local topography for inclusion in one of her 'souvenir albums' which she and Prince Albert had compiled since their marriage.

For 40 years Fisk taught drawing and painting at University College School in Gower Street, which had been founded in 1830 as part of University College London. He was also an anatomical draughtsman at the Royal College of Surgeons.

Oil painting, 'Albrecht Dürer' (design for a mosaic in the Museum), William Henry Fisk, about 1869