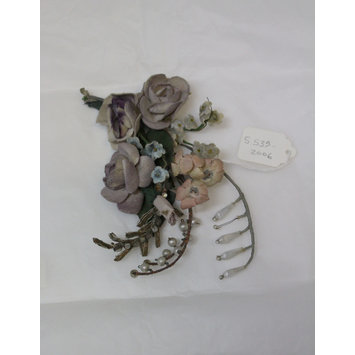 Costume designing involves not just the major clothes for a production, but every accessory and total ‘look’ of the character. The character of each role is reflected in the clothes that they wear, which means that the designer has to have a total knowledge not just of the play as written, but of the play as interpreted by the director as well as the preferences of any star actor.

The spray is one of several, of differing sizes but of the same overall concept, scale and style of making. However, identifying how items like this were used in a theatre production can be difficult, involving lengthy detective work. Some could be decorations for the hair, or for a coat or a hand muff. Not every design survives and those that do may not be in great detail. Messel, had a team of makers and assistants familiar with his methods, and only had to use a ‘shorthand’ or even just verbally explain what he wanted. In fact, these objects are unusual in their making; Messel usually favoured a bolder approach and used unusual materials, like acetate, pipe cleaners or chandelier drops. The fabric and bead flowers are more like the sprays available to the general public for fashionable wear.

Possibly the sprays were part of the original concept, but were abandoned either during the initial dress parades, when the finished costumes were seen together for the first time, or in subsequent dress rehearsals.

Oliver Messel (1904-1978) was Britain’s leading theatre designer from the early 1930s to the mid 1950s, working in every aspect of entertainment - ballet, drama, film, musical, opera and revue - as well as in interior decoration and textile design. His lavish, painterly and romantic designs informed by period styles, were perfectly in tune with his times and earned him an international reputation. By 1960, however, Messel’s style had become unfashionable, having no sympathy with the new 'kitchen sink' school of theatre. He increasingly concentrated on his non-theatrical painting and designing and eventually retired to the Caribbean, where he began a new career designing and building highly idiosyncratic luxury villas.

Curving floral spray, the main stems of wire covered with green paper or green thread. Towards the base are a group of three flowers, their petals of stiffened cotton and velveteen, coloured shaded lilac; above are three 'rose leaves' of green glazed cotton. Above these is a spray of 'stephanotis' made of paper coloured creamy pink and sprays of velveteen 'forget me nots' in white and pale blue. At the top is a sprig of 'buds' made of elongated pearl beads, topped with a tiny pear, two sprigs would with gold tinsel ribbon from which hang round pearls tremblant; below is a stem of alternating clear and faceted steel stones, edged with looped 'leaves' of gold thread.

wired stems with fabric and paper flowers and sprays of beads, pearls and gold thread

A similar spray has been identified in the original listing of the Messel collection as for the Countess in The Dark is Light Enough, a verse play in three acts, written by Christopher Fry, first produced at the Aldwych Theatre, London, in 1954. Directed by Peter Brook and designed by Oliver Messel, it starred Edith Evans as the Countess and James Donald as Gettner.
Lord Snowdon, Oliver Messel's nephew, inherited Messel's theatre designs and other designs and artefacts. The designs were briefly stored in a disused chapel in Kensington Palace before being housed at the V&A from 1981 on indefinite loan. The V&A Theatre Museum purchased the Oliver Messel collection from Lord Snowdon in 2005.

Flower spray possibly designed by Oliver Messel for Edith Evans as the Countess in Christopher Fry's play The Dark is Light Enough, 1954. Large curved floral spray of fabric flowers with wire and bead leaves and stems.

The attribution of this and related floral sprays to Messel's designs for The Dark is Light Enough must remain tentative until the 'detailed design' is retrieved. 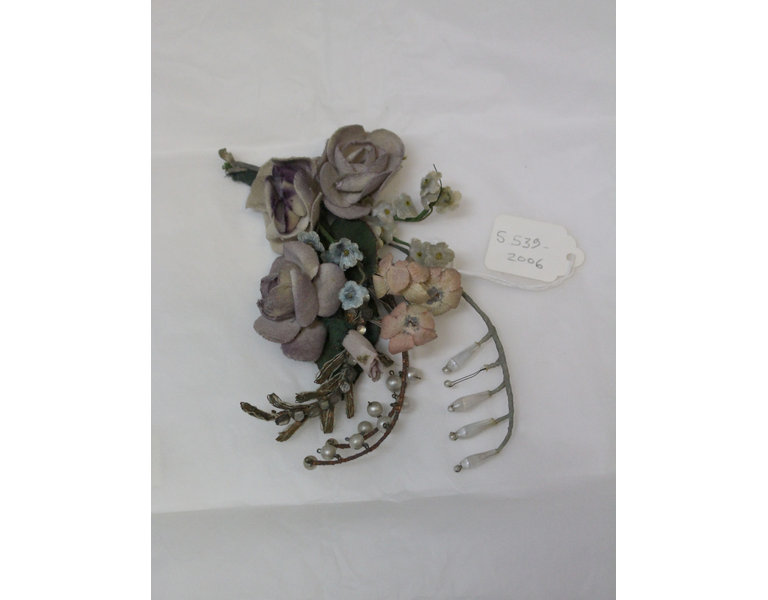