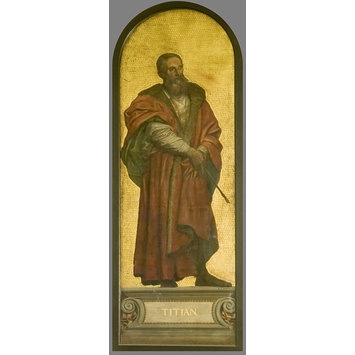 Titian: design for a mosaic in the Museum (the 'Kensington Valhalla')

Full-length portrait of Titian. He is bearded and wears a long red cloak trimmed with fur.

Historical significance: Titian (Tiziano Vecellio, ca.1485-90 - 1576) was the greatest painter of the 16th century Venetian school. He was equally pre-eminent in all the branches of painting practised at this time: religious subjects, portraits, allegories and scenes from Classical mythology and history.

G. F. Watts (1817-1904) was one of the greatest figures of the Victorian art world. He was renowned as one of the foremost portrait painters of the era; however, his principal achievement was his body of imaginative, symbolic works.

Oil painting, 'Titian' (design for a mosaic in the Museum), George Frederick Watts, about 1868-70