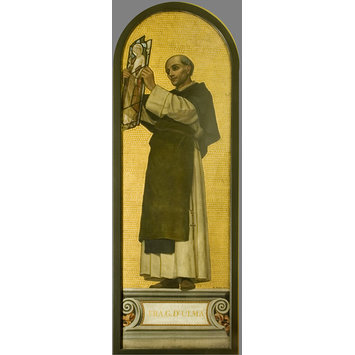 Fra Giacomo da Ulma, German Painter on Glass at Bologna: design for a mosaic in the Museum (the 'Kensington Valhalla')

Historical significance: Fra Beato Giacomo da Ulma (d.1517) is said to have been a Dominican Friar who painted on glass at Bologna. He is by far the most obscure figure of the Valhalla series.

The stained glass designer Nathaniel Westlake (1833-1921) was a protégé of the Gothic Revival architect and designer William Burges. Westlake began to design for the English firm of stained-glass manufacturers Lavers & Barraud in 1858, becoming a partner in 1868, after which the firm was called Lavers, Barraud & Westlake; he retained this name after he became sole partner in 1880. It was Westlake's knowledge of medieval art, Pre-Raphaelite style and simplification of previously over-elaborate drawing that brought the firm success in the 1860s.