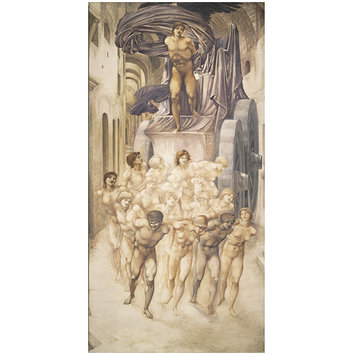 The Car of Love

Historical significance: Edward Burne-Jones was the leading figure in the second phase of the Pre-Raphaelite movement. His paintings of subjects from medieval legend and Classical mythology and his designs for stained glass, tapestry and many other media played an important part in the Aesthetic Movement and the history of international Symbolism.

The triumphal procession of Love was a common theme in Medieval and Renaissance literature and art. However, the specific basis of Burne-Jones's composition in The Car of Loveis a long allegorical poem by the 14th-century Italian poet Petrarch, the Trionfior Triumphs. The poet has a vision of a number of victorious pageants or triumphal processions, in which historical, Biblical or mythological figures take part. The first triumph is that of Love over the human heart; the next is Chastity, which triumphs over Love; followed in turn by Death, Fame, Time, and finally Eternity, which triumphs over all.

In this unfinished painting Burne-Jones shows Cupid, the god of love, being pulled on a great chariot down a narrow city street by a crowd of men and women. Some laugh, others appear anguished. The architectural background is based on the narrow streets of Medieval Siena.

Burne-Jones first conceived the idea for The Car of Lovein 1871 or 1872, but work on the large painting in the V&A did not begin until the early 1890s. It was left incomplete at Burne-Jones's death in 1898.

An earlier design, probably the sketch referred to in Memorials,pp. 191-2, as 'a black rough charcoal thing done in a heat one evening', is in Falmouth Art Gallery (charcoal on paper stuck to canvas, 162 x 89cm, FAMAG: 1923.19; see image in object file). This design shows Burne-Jones's original concept of the composition, in which the procession takes place in a narrow gorge, with towering rocks on either side and a glimpse of the sea in the background. The streets of medieval Siena replaced this setting in the final composition.

Another head study, signed 'E.B.J.', dated 1895, and inscribed (apparently by the artist) 'for the CAR of LOVE' was offered for sale at TEFAF Maastricht and the Salon du Dessin in Paris in 2013. Photographs and correspondence in V&A object file. 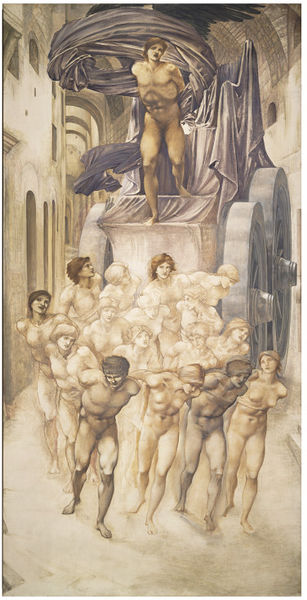