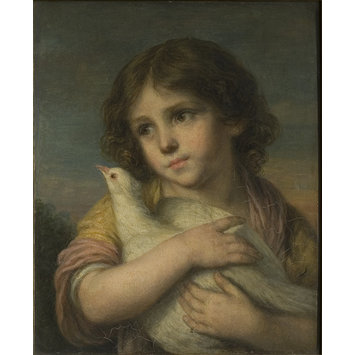 Innocence: A Girl with a Dove

Jean-Baptiste Greuze (1725-1805) was born in Tournus in the Burgundy region not far from Lyon. He first trained in the late 1740s with the successful portrait painter Charles Grandon (c. 1691-1762)in Lyon and became an associate member of the Paris Académie Royale de Peinture et de Sculpture in 1755. specialised in genre scenes, portraits and studies of expressive heads (têtes d'expression). He achieved a rapid success and was praised by Denis Diderot, who wrote about him in the Salon reviews but towards the end of his life, his reputation declined.

This painting was probably made by one of Greuze's female pupils, and most likely by his own daughter Anne-Geneviève who took over her father's taste for depicting expressive heads. This painting shows a young girl holding a dove against her breast, a composition that is sometimes interpreted as an allegory of innocence.

Bust-length portrait of a young child holding a dove against her breast with an atmospheric landscape in the background; she has dark curly hair, wears a red and ochre dress and mantle and is looking towards left.

Historical significance: This painting was probably executed by one of the immediate followers of Jean-Baptiste Greuze who used to imitate his style and replicate his compositional formulas. The painting shows a young girl holding a dove against her breast with an atmospheric landscape in the background. Although this painting bears stylistic characteristics of Greuze's art, it has a delicate softness and an innocent sentimentality that appears foreign to Greuze (A. Laing, verbal opinion, Nov. 2010) but may be referred to his female pupils, either his daughter, Anne-Geneviève Greuze (1762-1842) or Jeanne-Philiberte Ledoux (1767-1840). Unfortunately their oeuvre is not very well known and only a few paintings have survived. That being said, some paintings by Anne-Geneviève bear some similarities with 585-1882, especially the Child with a Doll, Louvre, Paris (R.F. 1524) which shows a very similar child and some light effects in the background.
The delicate colours echo the intimate subject of the painting: a young girl holding a dove against his breast with a landscape at dusk in the background. This subdued palette allows the landscape to enhance the dreamy expression of the sitter. The dove is usually the attribute of innocence and pure love, and some similar compositions were sometimes interpreted as the allegory of innocence.
This painting is a good example of Jean-Baptiste Greuze's influence in the technique and the genre of the sentimental portraits he somehow created.

Oil painting, 'Innocence: a Girl with a Dove', follower of Jean-Baptiste Greuze, probably painted by Anne-Geneviève Greuze, before 1795 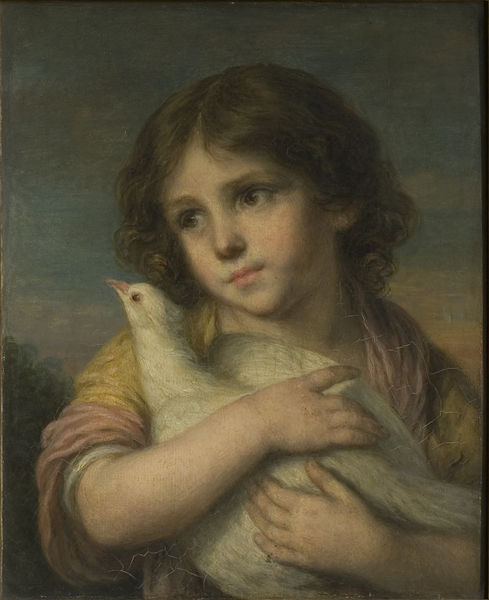