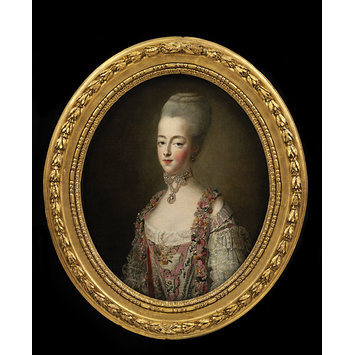 Marie Antoinette, Queen of France, in a court dress

This painting is a portrait of the Dauphine Marie-Antoinette, consort of the future king of France, Louis XVI, at the age of 17. It depicts the princess in a lavish court dress adorned with sumptuous jewels. This portrait was used as a model for a tapestry made in the Royal manufactory of the Gobelins by the Cozette father and son in 1775. This portrait is a good example of French state portraits of the 18th century and the representation of an almighty royalty about to fail in a few years time.

Portrait of Marie-Antoinette in an oval format with a neutral dark background; she wears a lavish white satin dress embroidered with a rose pattern and sumptuous jewels.

Historical significance: This painting appears to be one of several versions derived from an earlier portrait of Marie-Antoinette as Hebe, goddess of youth, executed by the same painter Drouais for Louis XV of France in 1772 and currently in the Musée Condé, Chantilly.
The present painting reuses the exact same pose and face but with different garments. 529-1882 portrays the Dauphine, Marie-Antoinette (1755-1793), consort of the Grand Dauphin Louis and future Queen of France, in a lavish court dress embroidered with a rose pattern and sumptuous jewels, which appears quite rare in Marie-Antoinette's iconography.
Despite the scepticism of the critics at the time about this series of portraits, which lack of vitality and likeness, the paintings achieved quite a great success and 529-1882 was probably chosen as the model for the tapestry made by the Cozette father and son in the Gobelins Manufactory (Chambre de Commerce et d'Industrie, Bordeaux), which is inscribed on left with "Drouais pit en 1773" and, on the right, with "Cozette ext en 1774". In fact, the tapestry reproduces the exact same garments and jewels as the V&A painting. The tapestry was commissioned by the financier and court banker, Nicolas Beaujon (see letter dated 5 October 1774, to d' Angivillers, Directeur des Bâtiments).
Drouais' portrait was also used as a model for a series of painted portraits executed by the copyists of the 'Cabinet du Roi' in order to multiply the effigy of the Dauphine - see the portrait of Marie-Antoinette, Inv. MV 3891, Musée National du Château de Versailles et de Trianon, which is a copy after Drouais prototype with variations of garments. This practice was usual in portraiture since the Renaissance and facilitated the diffusion of the royal image by painters who therefore did not need to have a direct contact with the sitter.

Marie-Antoinette is shown here at the age of 17. She was already married to the future king Louis XVI, and a year later would be queen. She wears formal court dress: a silk gown with embroidered stomacher, needle lace and silver trimmings, and a jewelled necklace. A leader of fashion, Marie-Antoinette was at first celebrated for her taste but came to be criticised for her extravagance. She died at the guillotine in 1793.

When Marie-Antoinette was queen of France it was fashionable for women to have huge hairstyles. To make their hair taller they sometimes used padding made of cow hair. They used grease made from bear’s fat and big spiky pins to hold it all in place.

This painted served as a model for a tapestry portrait made by Michel-Henri Cozette in 1774 which is inscribed Drouais Pixt. en 1773, Drouais, who was a fashionable portrait painter, also painted a larger portarit of Marie Antoinette
in 1773 which is in the Musée Condé, Chantilly. 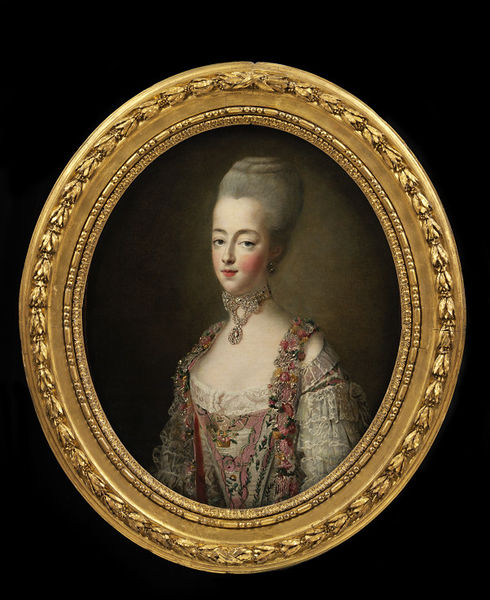