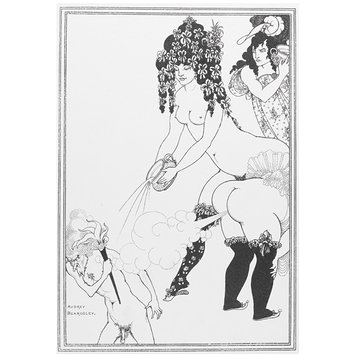 Aubrey Beardsley's distinctive black and white drawings for Oscar Wilde's Salomé, published in 1894, brought him an extraordinary notoriety whilst still in his early twenties. His work for the periodical The Yellow Book confirmed his position as the most innovative illustrator of the day, but as a result of the hostile moralistic outcry that followed the arrest and trial of Oscar Wilde in early 1895, John Lane and other publishers panicked and dropped Beardsley. Thereafter, almost the only publisher who would use his drawings was Leonard Smithers. Smithers was a brilliant but shady character who operated on the fringes of the rare book trade, issuing small, clandestine editions of risqué books with the boast: 'I will publish the things the others are afraid to touch'. Smithers encouraged Beardsley's already growing interest in French, Latin and Greek texts of this kind and commissioned drawings to illustrate the Satires of the late Roman poet Juvenal and, most famously, Aristophanes's bawdy satirical play Lysistrata.

The seemingly obscure and bizarre iconography of the design is in fact explained by reference to Aristophanes' text which describes the comic attempts of the Athenian women to defend the city.

This print comes from the folio of reproductions made from Beardsley's original drawings and published in about 1929. Utilising the expensive collotype process, these prints are much closer to the originals than the earlier line-block prints of the1896 edition of the book or the various, mostly very poor reproductions included in subsequent pirated printings.

Black and white print on paper depicting Lysistrata and two Athenian women, all semi-naked, driving off a small naked man carrying a torch. Two of the women throw the contents of chamber-pots, whilst the third bends over and breaks wind.

One of eight plates by Beardsley for The Lysistrata of Aristophanes London: L Smithers, 1896.

Collotype print after Aubrey Beardsley (1872-98). 'Lysistrata Defending the Acropolis', from The Lysistrata of Aristophanes 1896. 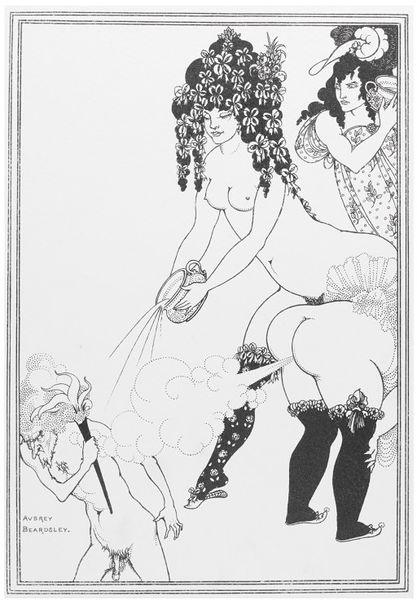