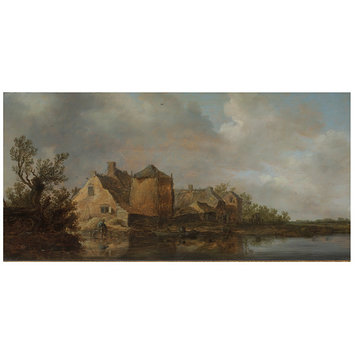 River scene with an inn

Jan van Goyen was a prolific painter and draughtman (1200 paintings and 800 drawings) but he did not gain recognition until the late 19th century.
Among his pupils were the famous genre painter Jan Steen (1626-1679) who was also his son-in-law, and the Italianate landscapist Nicolaes Berchem (1620-1683).

This painting, signed and dated 1630, is a good example of the early style of Jan van Goyen when he was still influenced by his master Esaias van de Velde (1587-1630). It displays strong brown and green tones dominated by a cloudy brown, white and blue sky. The composition and the horizontal format are close to van de Velde's inventions however it already foreshadows his great and famous seascape paintings. This kind of painting precedes indeed the important change of the 1640s when he reduced dramatically his local colour to a more tonal palette and achieved a stronger impression of depth with the help of diagonals.
Van Goyen remained heavily influenced by van de Velde's work until the late 1620s and early 1630s. he then moved to the capital The Hague in 1632 where he resided until his death.

A summer river scene with an inn and trees in the mid distance, dominated by a cloudy sky.

Historical significance: Jan van Goyen is famous for his tonal river scenes and seascapes that long influenced Dutch painters, in which a high cloudy sky contrasts with flat terrain and distant boats or buildings, an essential characteristic that can be also found in his large production of drawings. However his early production was inspired by the Haarlem landscape painter Esaias van de Velde (1587-1630), with whom he trained and also collaborated in few occasions. The connection between the two painters is important as van de Velde appears as the one who contributed to break away the somewhat stylised tradition of landscape and to introduce a more natural feeling for space and atmosphere in contrast with the previous tradition inherited from Peter Brueghel the Elder (1525/30-1569). These qualities will soon become characteristics of the Haarlem school. This painting is a good example of the early production of van Goyen under the influence of Esaias van de Velde. These river summer scene's brown and green tones are still strong and precede the great change of the early 1630s when he reduced dramatically his local colour to a more tonal palette and achieved a stronger impression of depth with the help of diagonals.
Despite his large output, 1200 paintings and 800 drawings, Jan van Goyen never received great commissions nor did he have success among his contemporaries. It is not until the third quarter of the 19th century that he was internationally rediscovered. He nonetheless had a great influence on Dutch landscape painters, especially in the early landscapes of Aelbert Cuyp (1620-1691).

Landscape paintings were extremely popular during the 17th century and increasingly encompassed a variety of forms and genres. Dutch painters had a new attention for nature and their familiar surroundings as well as more exotic locales that Dutch travellers encountered such as Italy. In the early 1600s, innovative contributions to landscape paintings were made, especially by the marine painters who concentrate on the effects of light due to atmospheric condition and the sense of depth and had a great resonance on landscape painting. Panoramic views became popular in the 17th-century Netherlands and views of the Dutch countryside developed quickly, especially under the influence of Jan van Goyen (1596-1656) who developed a broken brushwork technique and used a restrained monochromatic palette of earthy colours. The end of the 17th century is remarkable for a shift in taste that came to favour more academic and classical landscapes under the influence of Italianate landscape paintings. Landscapes were then often employed as settings for mythological or historical subjects. 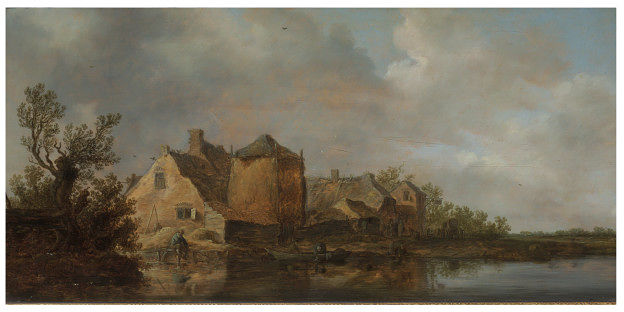