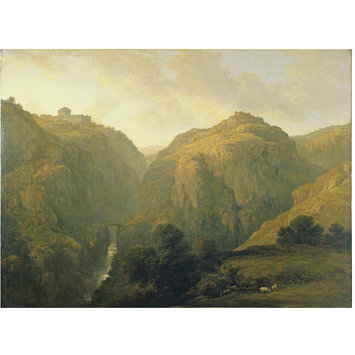 Historical significance: John Glover (1767-1849) began as a drawing-master at Lichfield, Staffordshire, from where he sent drawings to London each year. In the 1790s he began to also work in oils, some of which were exhibited at the Royal Academy from 1795 onwards. His works were more highly valued than those of any other artist at the first exhibition of the Society of Painters in Watercolour (1805). He was elected president of the Society in 1807 and again in 1814-15. Working also as a painter of large oils, Glover was seen as a rival to the landscape artist Joseph Mallord William Turner ((1775-1851), much to the annoyance of Constable. Glover visited Paris in 1814, where he won a gold medal at the Salon for his Paysages Composè and he later travelled to Italy. In the 1820s he staged a series of one-man shows where he placed his work among the pictures of Claude Lorraine (1604-1682) and Richard Wilson (1713-1782) as for the public to judge. In 1829 the artist emigrated to Australia and settled in Tasmania, where he lived until his death, farming sheep and painting landscapes for wealthy immigrants. He was one of the first artists to try and faithfully depict the Australian landscape.

The location depicted in this landscape has not been identified but appears to be European. Glover was a keen observer of nature and throughout his career tried to make accurate records of landscapes both in his sketchbooks and paintings. It is therefore likely to be of an actual location. Glover travelled extensively to Europe in the second decade of the nineteenth century. The rocky landscape, dotted with trees, with its deep ravines is very similar in style and palette to Glover’s oil painting Tivoli from circa 1820 (Illustrated Henson, catalogue 42). Both these works show the artist’s interest in the cascading waterfalls that have created the sharp curved rock formations. A watercolour titled Classical Landscape, Italy, also from circa 1820 (Tate) combines the same rugged rocks with the calmer contours of green knells in the foreground.

Glover visited Tivoli during his Italian tour in 1818 and sketched extensively the landscape around this ancient city. The striking similarity between the landscape of 188-1881 and that of his oil painting Tivoli suggests that the V&A painting could represent a scene from this area. Glover created compositions from the drawings he had made and collected in his sketchbooks throughout his career to produce oil paintings of landscapes he had seen on his tours. It is likely that this painting therefore dates from the 1820s, following Glover’s trip to Italy in 1818 and before he emigrated to Australia in 1829. If it is of the landscape around Tivoli it is interesting to note that the painting does not represent the famous views of the town. Scenes of Tivoli often show the town perched on the hill top along with the Roman Temple of the Tiburtine Sybil. However, with his interest in faithfully representing landscape and the number of sketches that he produced, it is likely that Glover chose to also represent less popular scenes in the environs at Tivoli. This follows the work of the seventeenth-century Dutch Artist Dughet (1615-1675), who also painted scenes of the rugged landscape around the Roman town.

This landscape focuses on nature and its overpowering force, embodied by the cascading waterfall of the river that has cut deep ravines in to the steep hills. The only reminder of man’s presence is the fortification perched high up in the top left corner of the painting. The identification of this fortification may establish the location of the landscape. This interest in representing an overpowering scene from nature occurs throughout Glover’s landscape and reflects the interest in representing the powerful and picturesque qualities celebrated in the notion of the Sublime that was popular in the eighteenth century.

The ancient town of Tivoli is located in Lazio about 30 kilometres north east of Rome at the falls of the Aniene river, where it issues from the Sabine hills. There are spectacular views over the Roman Campagna from the hilltop setting of the town and its environs.

The area was a favourite spot for painters and travellers on the Grand Tour during the eighteenth century. There were surviving structures from the city's Roman past including Hadrian's villa and the Temple of the Tiburtine Sybil. The environs of this town were particularly popular with visitors. The views across the fertile Roman Campagna echoed the landscape paintings of the sevententh-century artist Claude Lorrain (1604/5-1682). On the other side the wooded rocky hills, combined with the torrents of cascading waterfalls encompassed the Romantic wilderness portrayed in the landscape paintings of Gasper Dughet, Poussin's brother-in-law and pupil (1617-1675). 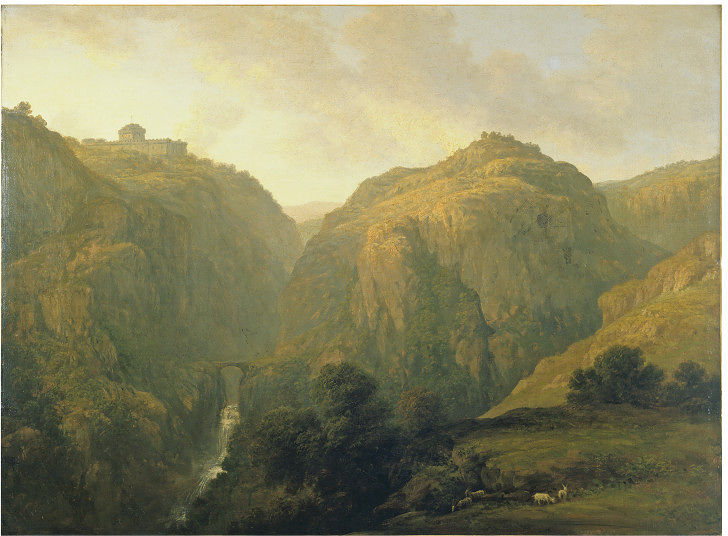