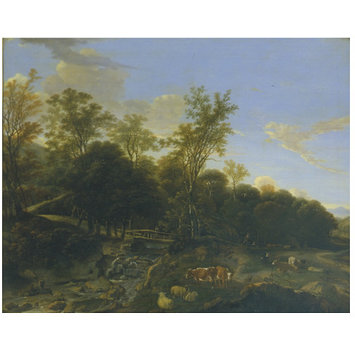 Landscape with Rustic Bridge and Cattle

This painting is a good example of the Dutch Italianate landscape painter Dirck van der Lisse. He often represents hilly wooden landscapes bathed in a warm sunlight with few figures and cattle, one of his favourite subjects being bathing nymphs. This landscape shows in a mere Dutch tradition ordinary people involved in a daily activity such as looking after the cattle and going on errands through the country. His work is distinguished by a yellow-golden palette that is used here through the subtle use of yellowish greens and reddish browns in the vegetation and the ground. These tones are echoed in the brownish colour of the cows' hides and in the golden yellow of the sheep's fleeces. The path leading to the rustic bridge and vanishing into the woods also structures the whole composition which is balanced by a lighter distant mountain in the far right. Therefore, despite the filled vegetation, the artist managed to provide his picture with a deep sense of space and expansiveness which is typical of Dutch Italianate landscape painters.

A hilly wooded landscape bathed in sunlight with a rustic bridge above a torrent; cows and ships in the centre foreground with figures and cattle at mid distance on the right.

'DVL'
Signed by the artist, in monogram, lower right

Bequeathed by John Jones, 1882
John Jones (1800-1882) was first in business as a tailor and army clothier in London 1825, and opened a branch in Dublin 1840. Often visited Ireland, travelled to Europe and particularly France. He retired in 1850, but retained an interest in his firm. Lived quietly at 95 Piccadilly from 1865 to his death in January 1882. After the Marquess of Hertford and his son Sir Richard Wallace, Jones was the principal collector in Britain of French 18th century fine and decorative arts. Jones bequeathed an important collection of French 18th century furniture and porcelain to the V&A, and among the British watercolours and oil paintings he bequeathed to the V&A are subjects which reflect his interest in France.

Historical significance: This painting is typical of van der Lisse's Italianate landscapes, typically representing hilly, wooded scenery, bathed in a warm sunlight with few figures and cattle. His work is distinguishable by his yellow-golden palette, evident here in the subtle yellowish greens and reddish browns in the vegetation and ground. These tones are echoed by the colour of the cows' hides, and the golden yellow of the sheep's fleeces. The zig-zag path leading from the rustic bridge and vanishing into the woods structures the composition, providing a deepness of space and expansiveness, despite the heavily wooded landscape. It is distinctive from Poelenburgh's in its use of colour; a characteristic also apparent in his Sleeping Nymph in the Mauritshuis, The Hague, which deploys a palette of reds, yellows and oranges.

Dirck van der Lisse (ca. 1607-1669) trained under the Utrecht landscape painter Cornelis van Poelenburgh (1594-1667) and moved in 1639 to The Hague, where he was a founder of the painters' confraternity Pictura in 1656, and became Burgomaster of the city in 1660. He belongs to the first generation of Dutch Italianate landscape painters. The most talented of Poelenburgh's pupils, he worked with him on a cycle of scenes based on Giovanni's Battista Guarini's Il pastor Fido, for Prince Frederik Hendrik of Orange Nassau. He favoured scenes with mythological and biblical figures, like those of his master, whose work he sometimes copied directly.

Italianate landscapes were particularly popular during the 17th century. The term conventionally refers to the school of Dutch painters and draughtsmen who were active in Rome for over a century from the early 17th century. They mainly produced pastoral scenes bathed in warm southern light, set in an Italian, or specifically Roman, landscape. The term is also often applied, but wrongly, to artists who never left the northern Netherlands but also worked primarily in an Italianate style. The taste for Italianate landscapes continued undiminished into the 19th century. 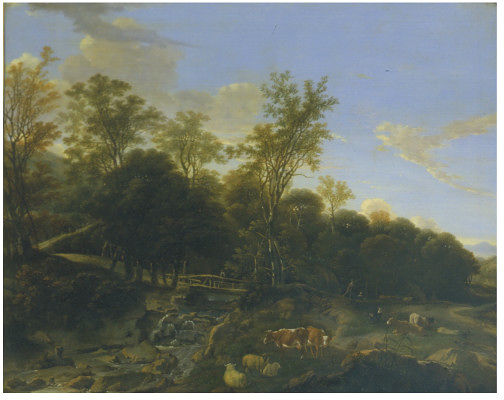