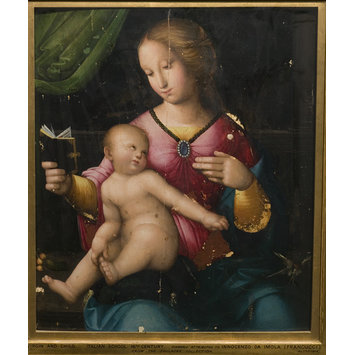 Madonna and Child with a Goldfinch

Andrea Piccinelli called Andrea del Brescianino (active ca. 1507-1525) was probably born in Brescia and then moved to Siena with his father Antonio di Tommaso and his brother Raffaele, both painters. Very little is known about Andrea's life but tradition has it that he trained with the Sienese painter Girolamo del Pacchia (1477-1533) and had frequent contacts with Florence although he was mainly active in Siena until 1525, date of his last documented work.

This painting is a good example of Andrea del Brescianino's manner of the 1510s when he came under the influence of Raphael in Florence where his brother ran a workshop. It shows the Virgin and Child depicted in a warm smooth palette which diffused light enhanced the soft modelling of the flesh. The painting is reminiscent of Raphael's art especially in the Virgin's feature and hairtsyle.

The Madonna and Child set against a dark neutral background with a green hanging drapery of the left. The Madonna is reading a book while the Child holds a goldfinch by a thread. A cucumber and three plums are depicted in the lower left corner.

Limousin fecit
On the open page of the book

Collection of Jules Soulages (1803-1857), Toulouse, whose entire collection was bought by a body of English subscribers in 1856 and subsequently acquired in stages by the South Kensington Museum; purchased, 1865.

Historical significance: Formerly attributed to Innocenzo da Imola, C.M. Kauffmann (1973) successively attributed this work to a follower of Raphael. However Federico Zeri (1978) convincingly noted that this painting could be ascribed to the so-called Brescianino, whose oeuvre generally encloses a group of works by two people, Andrea Piccinelli called Andrea del Brescianino and his brother Raffaele who probably ran a workshop in Florence.
This painting shows the Virgin reading a book and the Child with a Goldfinch held by a thread. The characters are set against a dark background with a green hanging drapery on the left while their flesh is delicately modelled thanks to a diffused light.
The picture is pervaded with Christian symbols such as the cucumber (lower left), which traditional meaning in Christian iconography is perdition and sin. It is however often associated with the Virgin Mary so as to emphasize by contrast her purity and innocence. Next to the cucumber are depicted three plums, another fruit that is often associated with the Virgin and Child. Its meaning differs according to its colour. Here, the greenish yellow refers to the Christ's chastity while the goldfinch symbolises his future Passion (i.e. the sacrifice of Jesus for the redemption of mankind). His Latin etymology, carduelis derives indeed from cardus, thistle, a plant this bird usually eats, which alludes to the crown of thorns Christ is wearing during the Passion. The open book refers to the education of the Virgin and is inscribed with the enigmatic inscription 'Limousin fecit'.
This painting has a striking similarity with The Holy Family, formerly Rabinowitz collection, Long Island, The Child and the Virgin's postures are exactly the same even though the Child is placed on the right knee of the Virgin while she holds his hip, with the Child's face turned exactly in the same direction and presented in three-quarter profile. This great similarity suggests that both pictures derive from the same cartoon, a pin-prinked drawing used like stencil to replicate design. From the same cartoon could also derive the figure of the Virgin in The Virgin and Child with St John the Baptist and St Jerome,, ca. 1510, Museo d'Arte della Val d'Arbia, Buonconvento. The present painting shows furthermore characteristic similarities with The Virgin and Child with the Infant St John the Baptist, National Museum of Capodimonte, Naples. The long thin nose, small mouth and slightly outspread eyes smoothly depicted in a warm subtle palette are characteristics of Brescianino's manner deeply influenced by Raphael. The influence of Raphael can also be seen in the Virgin's hairstyle in the four paintings, long golden hair loosely tied, sometimes with braids, typical of Raphael's female figures.
Although it is difficult to identify whether this painting was depicted by Andrea or Raffaele, this picture is however close to works firmly attributed to Andrea, who was deeply influence by Florentine painters and especially by Raphael from ca. 1510. This painting could therefore be dated around 1510 with greater reason that works of slightly later date such as Three Virtues, ca. 1517-18, Pinacoteca Nazionale, Siena, shows the dominant influence of Andrea del Sarto (1486-1530). 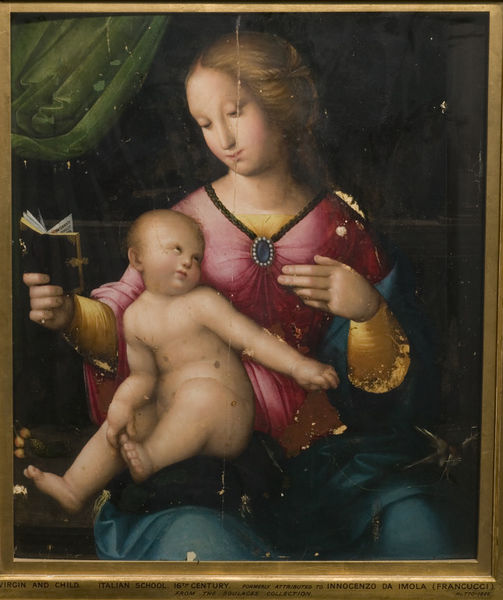