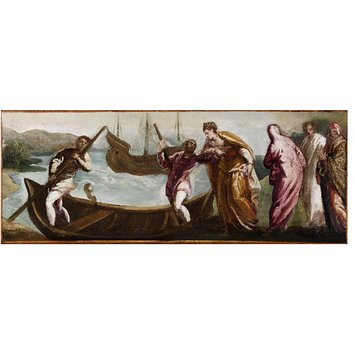 The Embarkation of St Helena to the Holy Land

This painting shows the embarkation of St Helena to the Holy Land. Helena was the mother of the first Christian Emperor, Constantine, and is said to have sailed to the Holy Land to find the cross where Christ has been crucified. On stylistic ground, this work belongs to the early period of Tintoretto and can be dated ca. 1555.

An elegant woman wearing a crown is embarking on a small boat helped by two men while three other draped figures on the right stands behind her, one seen from the back and another wearing a turban, with a Galion in the background.

The painting was originally catalogued as by the Croatian-born painter Andrea Schiavone, active in Venice in the first half of the 16th century. It is thanks to the high quality of the typically broken brushwork, and a palette of cool greys offset by white, ochre and carmine that it was identified as an authentic work by Tintoretto. In addition, research into the artist’s work revealed that the V&A painting belongs to a group of three showing the same group of figures with the recurring female at the centre of the composition.

Until then the subject matter could not be determined, and was described as ‘The Embarkation of a Queen’. Comparison with the other two paintings showed that the
V&A picture depicts the embarkation of St Helena to the Holy Land. It is followed by the discovery of the True Cross (Hyde collection, Glenn Falls, New York) and the testing of the True Cross (Art Institute, Chicago). The cycle clearly illustrates the legend of St Helena and the Holy Cross. Helena was the mother of Constantine, the first Roman emperor to convert to Christianity. She is said to have found the actual cross on which Christ had been crucified.

The canvas support was unusual for such small paintings. They might have been overdoors, or part of frieze, in a private house or church.