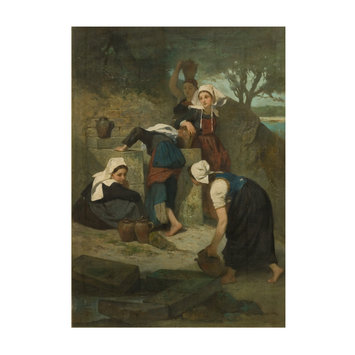 Girls at a Well

Jules Cornilliet (1830-1886) was a pupil of the painters Ary Scheffer (1795-1858) and Horace Vernet (1789-1863) in Paris. He painted history scenes in the troubadour style and genre paintings sometimes inspired by Orientalist movement. He made his Salon debut in 1857.

This painting is a fine example of genre paintings which developed in the second half of the 19th-century, inspired by the Realist movement emerged in France in the 1840s, which aroused a new interest in rural subject. It shows a group of women at a well wearing typical dresses and headgears from Brittany. This luminous albeit sketchy manner achieved a great success with both French and British patrons.

A group of five women gathering water in jugs at a well; some broken slabs in the foreground, trees in the middle distance and a glimpse of sea and beach in the right background.

'J. Cornilliet 1867'
Signed and dated by the artist, lower right

Historical significance: This painting is a fine example of Cornilliet's output. It shows a group of women at a well, dressed in the traditional Brittany costumes. This scene of everyday life combined with an interest in rural subject is typical of the French Realist movement emerged in the 1840s.
Comparable scenes include bathing at the Grenouillère, sold Martinet, Savignat, Antoine, Pontoise, 19 Jun 1994, lot 134.
Although peasant scenes had been elevated to the status of history paintings during the first half of the 19th century, this type of scenes aims at documenting the time and the popular culture without the social claim Courbet and the Realist painters put in their own compositions. This new Realism is generally called Naturalism and was praised by the Second Empire society as representations of hard workers whose humble life was a symbol of morality. 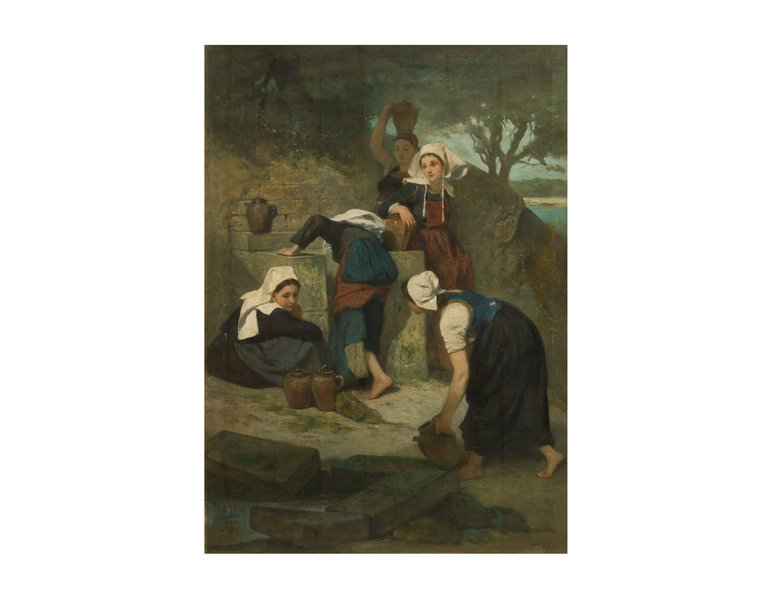