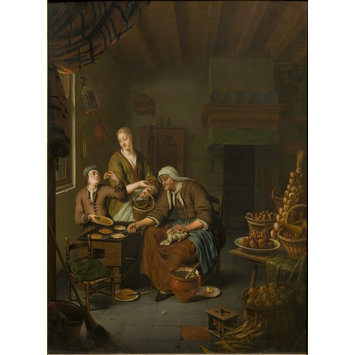 According to CM Kauffmann, this painting is originally one of a pair with a Woman spinning (maybe in the Residenzgalerie, Salzburg). The artist signed and dated the panel but the date is hardly readable and indicates the second decade of the 18th century. After the turn of the century, Willem van Mieris indeed specialised in shops and kitchens, often seen through an arched window, genre scenes that form the majority of his production. This painting and his presumably pendant both show a similar setting and highly stylised figures with a profusion of objects and minutely rendered details. The still-life compositions are especially noticeable and belong to the great tradition of Dutch still-life paintings that developed greatly during the 17th century. By contrast, the figures look stiff and stereotyped as the artists reemployed the same characters over and over in his compositions.

In a rustic interior an old woman is cooking pancakes for a young boy while a woman is looking at him.

Historical significance: Originally one of a pair with a Woman Spinning (de Bruyn sale 1724; Hofstede de Groot, nos. 214, 224a). Its pendant is perhaps identical with the painting now in the Residenzgalerie, Salzburg. The present work was apparently sold singly at the Crewe sale in 1810. Highly prized at the time, it was the only entry in the sale catalogue with its title in large capitals and one of only a few to be honoured by a descriptive text: 'a high finished and valuable work by this esteemed master.'

Both display a similar setting with highly stylised figures and a profusion of objects and minutely rendered details. The still-life compositions are especially prounounced but the figures seem stereotyped. Van Mieris tended to repeat compositions and the present painting resembles his Woman looking after a Child, dated 1728, private collection. The present work is signed and dated 171[?], and can reasonably be assigned to the late 1710s, when his style became more stereotyped and repetitive.

Willem van Mieris (1662-1747) was the son and student of the genre painter Frans van Mieris. He was active between 1682 and the mid 1730s, when he became partially blind. Around 1694, he founded in Leiden, with the painters Jacob Toorenvliet (ca. 1635-1719) and Carel de Moor (1655-1738), a drawing academy which he directed with de Moor until 1736. After 1700 van Mieris specialised in genre scenes of shops and kitchens, indebted to Gerrit Dou and other earlier Leyden 'Fine painters', celebrated for their small scale paintings full of minute detail and executed in a polished style. His technical virtuosity remained unimpaired until the late 1730s, when he went blind. 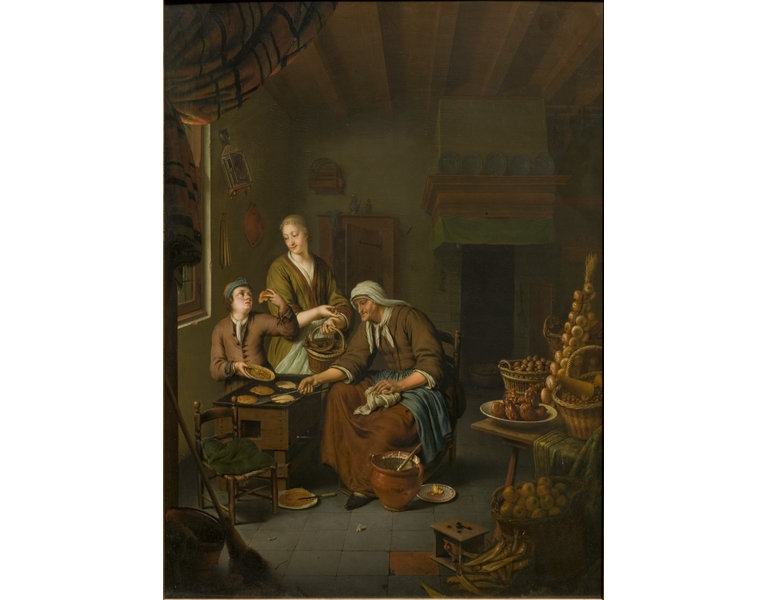