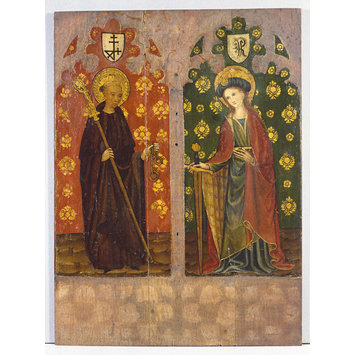 Painted rood screens such as this were an essential part of the structure and decoration of a mediaeval church. The screen separated the priest and the altar from the congregation. It takes its name from the rood (cross) mounted above it. Christ on the cross was usually flanked by figures of the Virgin Mary and St John.

A panel depicting two standing saints: on the left-hand side, a male saint, tonsured, in a black robe, holding a crosier and manacles; on the right-hand side, a female saint in an ermine-lined red mantle over a green and blue under-robe, holding a sword and a book. The backgrounds of each figure are alternately red and green, the male saint being on red, and are decorated with pomegranate and flower patterns in gold. Above the male saint is the device and above the female saint the initials of Ralph Segrym, merchant of Norwich, the donor of the panels.

From a rood screen together with another panel in the museum: St Agatha Holding Pincers and a Breast; St William of Norwich with Three Nails in His Head (24-1894).

From the Church of St John Maddermarket, Norwich.

Painted in Norwich by an unidentified artist.

Historical significance: The panel is painted with two full-length, nimbed figures of saints, in gold and colours. It is among the earliest examples of this form of English painting and one of the very few screens which can be dated.

This panel depicts a male saint, on the left-hand side, tonsured, in a black robe, holding a crosier and manacles, objects attributed to S. Leonard. On the right-hand side is a corresponding female saint, in an ermine-lined red mantle over a green and blue under-robe, holding a sword and a book, objects most commonly associated with S. Katherine. The saints face each other with downcast eyes, standing alone apart from the objects in their hands. The backgrounds of each figure are alternately red and green, S. Leonard being on red, and are decorated with pomegranate and flower patterns in gold. Above S. Leonard is the device and above S. Katherine the initials of Ralph Segrym, merchant of Norwich, the donor of the panels. His initials enable the panel to be dated.

Panel from a rood screen entitled 'St Leonard with Crozier and Manacles; St Agnes (?St. Catherine) with Sword and Book', commissioned by Ralph Segrym, from the Chapel of St Mary in St John's Church, Maddermarket, Norwich. Painted in Norwich by an unidentified artist, ca. 1450-1470.

In a pre-Reformation church the whole congregation looked towards the rood screen, which separated the priest and altar from the people. The saints shown here both suffered for their faith. St Agatha was tortured and her breasts were cut off with pincers. St William of Norwich was said to have been slaughtered by Jews in the 12th century. [27/03/2003] 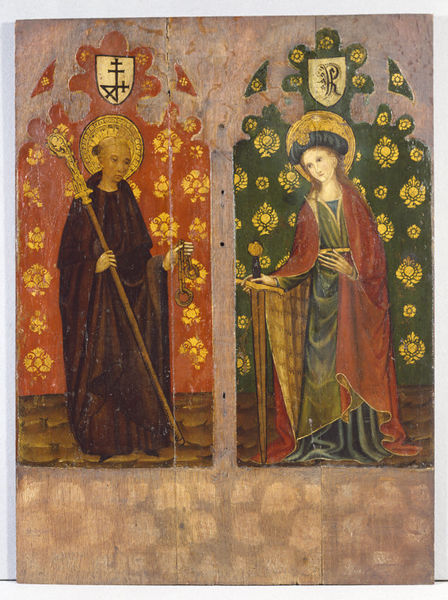