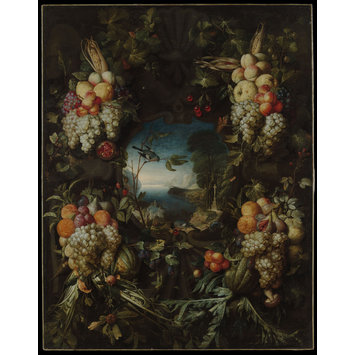 Garland of Fruit Surrounding a Cartouche Opening onto a Landscape

Very little is known about Jan Pauwel Gillemans (1618-1675) the Elder's life and work. Son of a goldsmith, he was born and resided all his life in Antwerp. He was most likely in contact with Jan Davidsz. de Heem's circle. His son, Jan Pauwel Gillemans the Younger (1651-1704) was also a still-life painter.

This painting belongs to the Flemish tradition of fruits and flowers garlands surrounding cartouche in which is represented another subject matter. They were characteristic of the school of Antwerp where Jan Brueghel the Elder (1601-1678), Daniel Seghers (1590-1661) and their followers produced still life combined with a figural scene.

A 'cartouche' fruit garland depicting fruits of different seasons, birds and butterfly surrounding a seascape with a cavalry and a church.

Historical significance: This work is a typical Flemish ‘cartouche’ flower painting, with a garland of fruit framing a cartouche, in which appears a different subject, in this case a landscape. Still-life painters seem to have produced such floral garlands for stock, leaving reserves for central cartouches to be added later, as required. The garland is richly garnished with a variety of fruit and vegetables from different seasons. The pomegranate on the left-hand side is a common symbol of the Passion.

X-ray photography has revealed that the landscape in the cartouch was painted by a later hand, probably in the 18th century, over an original painting of the Virgin and Child. The landscape also has religious connotations, with a calvary on the right and a church on the left.

This painting was acquired with another flower-piece of similar character (V&A, 4420-1857), in which a garland of flowers surrounds an angel's head with the holy sacrament. This was formerly attributed to Daniel Seghers, but in 2010 was reattributed to Jan Pauwel Gillemans. The two works may have been intended as a pair.

At Antwerp flower painters such as Jan Brueghel the Elder (1601-1678) and Daniel Seghers (1590-1661) often collaborated with figure painters including Peter Paul Rubens (1577-1640) on works such as the Madonna in a Floral Wreath, ca. 1620, Alte Pinakothek, Munich. Paintings with cartouches representing religious subjects such as the Virgin and Child could serve for private devotion. Later, similar compositions were combined with secular subjects, including portraits.

Still-life painting reached the height of its popularity in the Netherlands during the 17th century.The style set by Snyders's Rubensian banquet pieces was developed at Antwerp by the Dutchman Jan Davidsz. de Heem (1606-1684), and opulent baroque confections of fruit, flowers, and precious vessels became popular throughout Europe. Scholarly opinion is divided over the extent to which these works were envisaged asmemento mori, or vanitas subjects, reminding of human mortality and inviting meditation on the passage of time. Fruit and flower pieces retained their popularity until the 19th century.

The landscape and birds in the centre are by a later hand, probably of the 18th century. An X-ray photograph shows that the composition originally contained the Virgin and Child, who were painted over when the landscape was inserted. 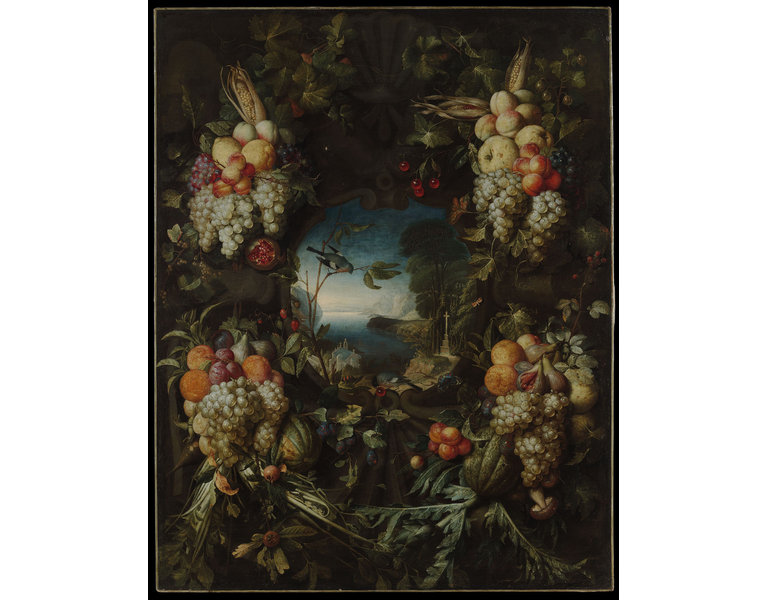